Last week I asked for suggestions on what I could post about, preferably involving seafood.  Unfortunately, I only received one suggestion.  Even worse, it was from ADB villain Matt Bendle, this blog’s devils advocate who happens to occasionally voice what people are thinking.  His suggestion: “bake a fish in salt”.

I had seen this done before on Iron Chef and also ordered it at a couple restaurants.  The presentation is pretty cool, it was always delicious, and generally seemed like a decent suggestion.  Goddamn Bendle.  So, I decided to create a birthday dinner for Mommy Ryan with the salt baked fish as the centerpiece.

This is where Janet watches most meals that I cook. That look says, “I have no idea what is going to come out of that bag of groceries but count me out.”  She confuses every item that passes within a foot of her face for a nipple but can somehow tell that she should be scared when I unpack groceries

After an appointment with our pediatrician in Brookline Village, I traveled an extra mile or two down Harvard Ave. to A) get gender appropriate clothing for Janet at TJ Maxx and B) hit Wulf’s fish market.

I’d heard great things about Wulf’s but never been before.  They didn’t disappoint, and I walked out with a freshly cleaned two and a half bound striped bass for $20.

Fins and gills are removed, but scales stay on. Helps protect the meat from getting too salty tasting

Although this was a beautiful fish, I knew it didn’t have quite enough meat to feed all four people at the birthday dinner, especially since one of them was brother John and his superhuman appetite.  Had to serve an app of some sort.  Let’s get started by cooking some bacon.

Finally finished the block of bacon. It contributed to some great meals

Hadn’t done this before, but I thought the bacon could be used in the shrimp fritters I was planning as an app, so I drained the cubes and left the bacon grease in the pan. From there I started working on the base for the fritter batter.

Red onion is as important as any other ingredient in fritters

Fritters are great to mess around with.  They are mostly just cornmeal with a teaspoon of baking powder and some salt mixed with milk, egg, and whatever else you want to include.  Speaking of the eggs… 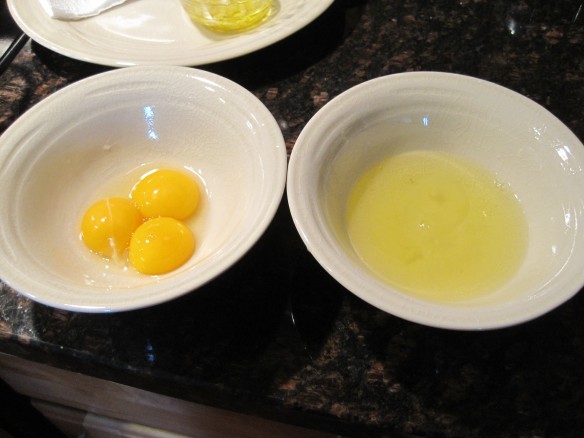 Needed the whites for the fish, so used the three yolks on the fritters. One beaten egg works just fine normally

The three yolks were beaten with the dry ingredients, a tablespoon of hot sauce and about a cup of water and milk.  From there, I added the cooked bacon cubes and a pound of chopped raw shrimp. 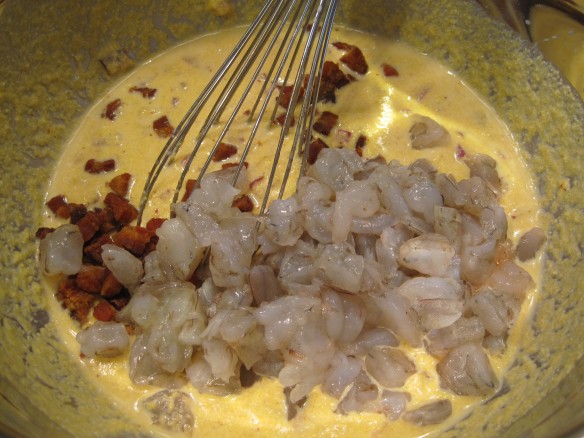 This general recipe works with any cheap shellfish. Small raw shrimp or bay scallops are great for making an inexpensive delicious appetizer

This got stirred together and dropped by the spoonful into the bacon grease pan with some additional vegetable oil added to it. 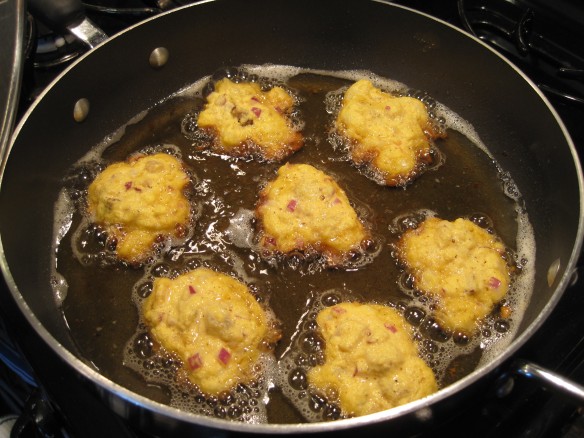 This should look very familiar if you’ve read my conch fritters post. The striper alone wasn’t quite enough to fill a post

Final product was about 20 fritters, best served with lemon and a little homemade spicy remoulade.

The remoulade was a huge upgrade over tartar sauce

These were a little better than the conch version, most likely due to using more shellfish in the recipe and the added flavor from the bacon.  You could tell they were good since Kristi made this plate for herself.

Janet chose to get hungry right as these were ready, so Kristi had to patiently wait for her daughter to eat before she could. Janet can be really self possessed sometimes

With everyone partially filled up on the cheese plate and fritters, it was time to start preparing the fish.  First up was mixing the three egg whites in with a little water and two pounds of sea salt until it had the consistency of wet sand. 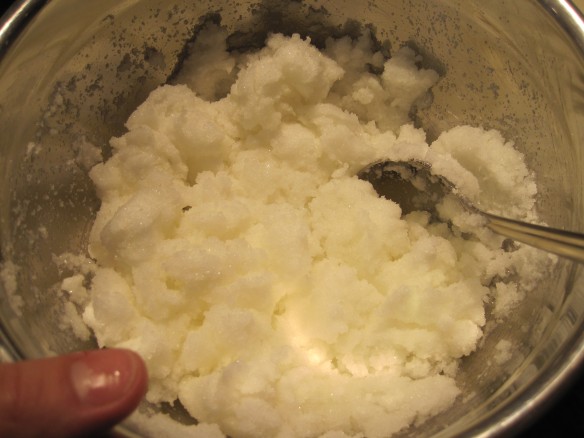 Two pounds of sea salt at Costco is $3. They’re practically giving the stuff away these days

Half of the salt went down on a parchment lined baking sheet as a bed for the fish.  I was working off a recipe I found online that recommended fresh bay leaves as the primary flavoring.  While I was skeptical since I had only used bay leaves in boiling items, I gave it a shot and laid a couple on the salt. 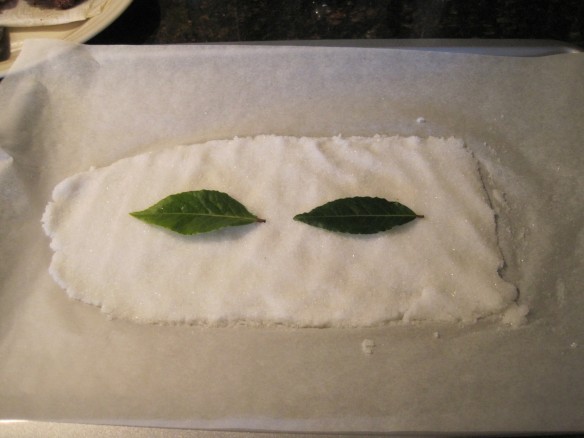 The fish went directly onto the bay leaves and I filled the body cavity with slices of lemon. 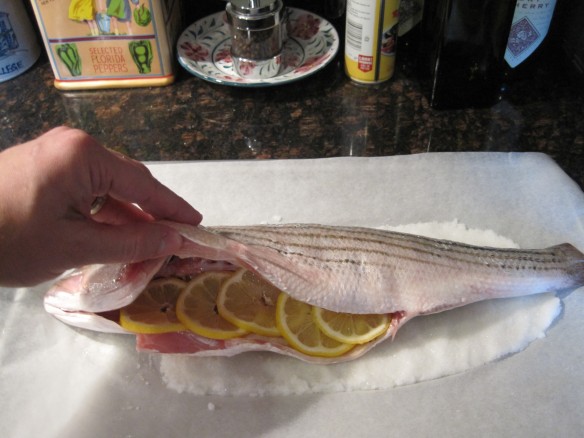 Lemons are a key part of any roasted fish dish

Then another layer of bay leaves before the salt crust.

Probably an unnecessary photo, but I had it so it goes in

I then used the remainder of the salt mixture to encase the body of the fish completely, leaving the tail and head exposed. 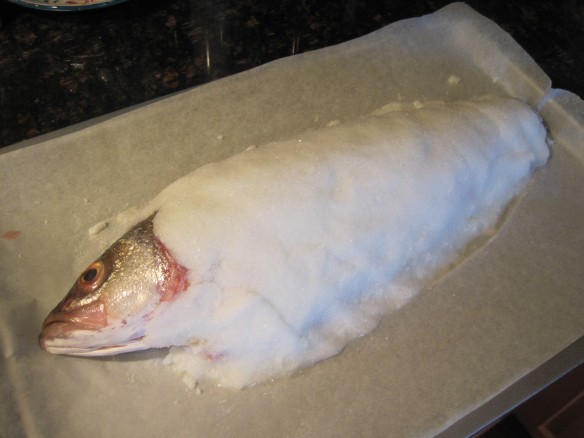 John was shaking his head at this point and making it clear that he didn’t expect this to work. It’s like Tim sent him with instructions or something

The fish headed into a 375F oven and while that cooked, I prepared the side dishes: Brussels sprouts and rice.  The Brussels were seared simply in olive oil and finished with a splash of lemon juice, salt and pepper.  The rice cooked in tomato juice and chicken broth and were tossed with roasted garlic and olive oil at the end. 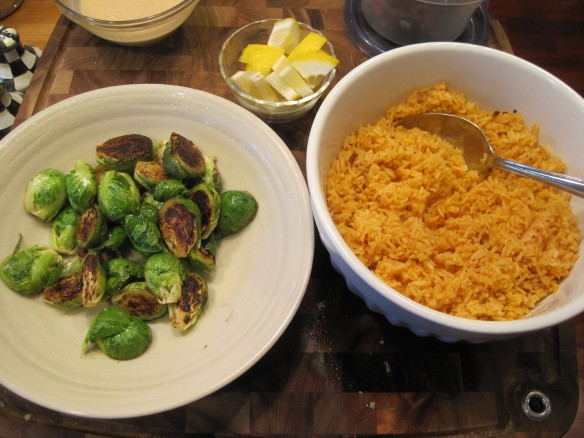 Kristi and I love Brussels sprouts, though we’ve never strayed far from this simple and always pleasing method of cooking them

After 25 minutes in the oven, the fish was ready to come out.

Doesn’t look too different, but the smell was wonderful

To get the fish out of the salt, you whack the shell a few times with a wooden spoon and remove the hardened chunks of salt.

I didn’t expect all of the steam the escaped when the salt was cracked.  I never really thought it through enough to realize that the secret of this dish is the fish steaming in it’s own juices so that it stays moist and flavorful

After removing a few large chunks of salt, the fish is freed from the mold and ready to be transferred to a separate platter.

Kristi picked the platter, she has officially become the funniest character on this blog

And at that point… I was a little confused what to do next.  The skin was a little gummy and still had scales so it was obviously inedible.  I was surprised to find that it peeled away easily and in one piece.

I was excited at this point, but then realized I once again had no idea what to do next

The meat under the skin was tender, light, and flaky, not what I usually expect from striped bass.  Because it was so tender, there was no way to remove the whole fillets, so instead I used tongs to pull the meat away from the bones.  Eventually, I ended up with this:

I think this is actually a bit before I finished pulling. It was around a pound and a quarter of meat total 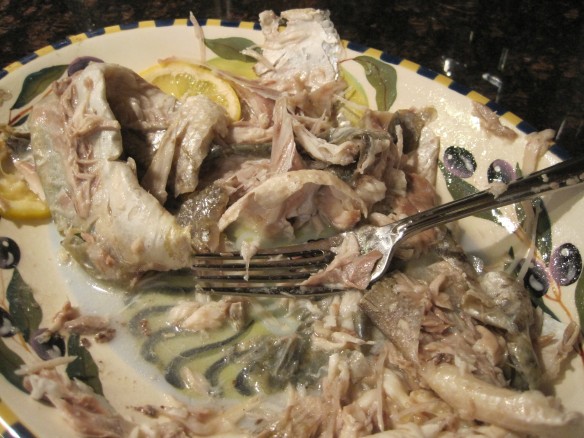 The lemons, skin, bones, and belly fat. Surprisingly, I didn’t turn this into pancakes or something 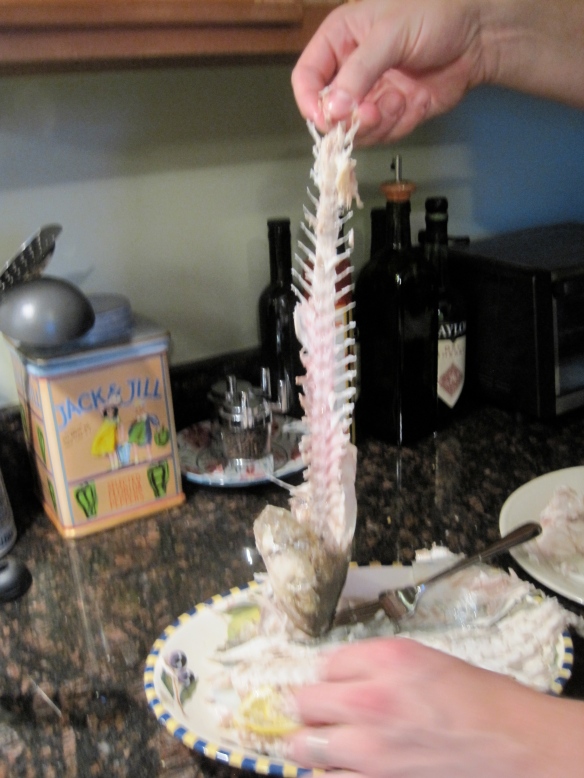 Picked pretty clean, except for one small morsel…

I couldn’t do this meal without indulging my love for odd foods a little bit.  In general, I like fish heads; I order yellowfin collar whenever I see it on a menu, can’t wait to have grouper cheeks again on my next trip to the Everglades, and have a begged my buddy John to save me the head of the next tuna he catches.  I usually ignore the eyeball, but I have heard good things.  Soooooo…

I waited till John, Mommy, and Kristi had all taken their food and headed to the dining room, telling them I would be at the table, “in just a second”

Eyeballs are a pretty simple item to eat; throw it in your mouth, suck out the contents, and pull the hard exterior out of your mouth.  I had no idea what to expect, but like many other odd items it sounds much grosser than it is.  It was just a little bit of gelatin with a mild fish flavor and then you pull out the empty shell.

I’d do this again

Enough of all that, back to the main event.

Loved the sweet and garlicky rice

The fish was wonderful.  It was moist, tender and had taken in all of the flavors from the lemons and bay leaf without becoming overly salty from the crust.  The most surprising thing was how enjoyable the flavors added by the bay leaves was.  I can’t describe it well, but they gave the fish a hint of welcomed herb flavor and a little bitterness.  Went well with the lemon.  The sweet and garlicky rice and the slightly al dente Brussels sprouts combined with the fish made for a great meal.

Next week I will share some of my recent baking exploits.  Have a great July 4th everyone.