I’ve started to frame how I think about food as being most similar to flight patterns when you live near the airport.  For a few months here and there, maybe you’re in the flight pattern and you have to deal with it, then without notice it goes away and you barely recognize that the change has happened.  That’s generally how my interest in cooking food cycles.  This one has been in the thought pattern for awhile now.

Recently I haven’t been as intrigued by cooking offal at home.  I still enjoy eating it (I ate a pile of Burmese pig ears and organs at my desk, courtesy of Dupee, this week) and have a freezer full of it waiting for me.  But, I can’t think of anything to cook with it.  On the other hand, I am back into cured meats and their wealth of possibilities.  Gravlax has been on the brain since the delicious version I had at the Vergennes Laundry last winter.

Hell of a sandwich. I alternated between loving that I brought Janet with me (because she was waving to people and laughing) and disliking it (cuz she ate all my gravlax)

Not sure where I had eaten gravlax before that fateful day in VT, but previously I always thought of the cured salmon dish as a pickled, sweet and vinegary concoction.  It’s much more similar to smoked salmon with the same buttery texture, minus the dried outside, and with the light flavor of smoke replaced by dill.  After the Laundry, I was on board with gravlax and heard it was pretty easy to make at home.  And now, here we are.

After a little research, it started with a nice piece of wild caught salmon.

These white plastic cutting boards and I are going through a slow break up.  I recognized last week that I have put them through hell and they were showing the pain of that treatment, so its time to let them go and have a chance at a second life.  I wish them the best and hope their next owner likes sticky cutting boards that never feel clean

When buying a large portion of salmon (this is about 2 pounds), you gotta go to Costco.  Sure you could throw caution to the wind and buy a $10/pound cut of farmed salmon, but your gravlax will likely end up tasting like liver pellets and mud.  Costco has the wild caught stuff for $13 a pound.

In order to make the filet relatively symmetrical, I trimmed off the belly meat strip and a bit of the end.

I saved the trimmings for the grillfest I was planning for later in the weekend and cut the filet into two roughly equal sized portions.

As I quickly learned, the beauty of gravlax is in its complete simplicity; the only other ingredients consistently recommended were sugar, salt, and dill. Although the recommended proportions of each varied widely.

For starters, I roughly chopped most of a store bought bunch of dill and threw away the stems.

One of Jack Ryan’s favorite stories involved telling someone that they couldn’t give a nun dill bread because it was made with dill dough.  Say it out loud and it will be more clear.  Now you get my sense of humor?

To the dill I added 2/3s of a cup of kosher salt and 1/3 of a cup of white sugar.  This proportion was the subject of much debate (in my mind) since every recipe called for a completely different ratio with many recommending more sugar than salt.  With my memory of crappy sweet pickled salmon from my first gravlax experience, I elected for the greater salt amount.  Also, I zested half a lemon in as well since citrus was recommended in about half of the recipes I saw.  Stirred that up so that all ingredients were well distributed.

Could have used less of the salt/sugar since I left a lot in the bowl, but I definitely don’t mind being wasteful with that stuff for some reason.  On the other hand, I have a sprig of dill in my fridge that is way past its prime that I am hoping to find a Hail Mary use for so I don’t have to throw it out

I placed the two halves of the salmon filet on parchment and pressed/packed the dill curing mixture onto the meat until it was fully covered with a thick layer.

Again, very simple process: press a bunch of stuff onto the salmon.  Definitely had the potential to get out of hand if I had continued to try to fit the entire bowl of dill/salt/sugar on there but I gave up with about a quarter left and decided not to try and fit more on

Then, with all the grace of when you’ve put toppings on both sides of your sandwich bread, I indelicately slapped these two pieces together.  Then, the usual sandwich process of scooping up everything that fell out and attempting to press it in from the sides. Eventually I had a salmon sandwich. 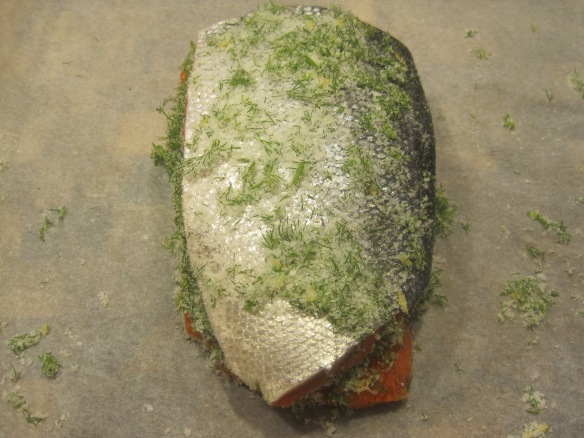 I’ll admit it, I trimmed the salmon end wrong.  It needed to be a mirror image of the other side and I cut the angle opposite.  Made for the one end being mismatched.  If I was a kid and this was the bread used for my grilled cheese, I would have lost my effing mind and believed the sandwich to be inedible (though I would have eaten it eventually because grilled cheese is delicious)

Using the parchment, I wrapped the salmon up burrito-style, folding in the ends as I rolled so I would have a nice compact package.

Not m’best burrito rolling.  On a quality scale of Annas Taqueria to Chipotle in terms of burrito rolling, I would give this a Qdoba.  Meaning it looked about as good as Chipotle, but was inexplicably sh*ttier

Every recipe I saw recommended some extensive plastic wrapping at this point to seal all air out.  Following a brief temper tantrum when I discovered we were out of plastic wrap, I realized that the Food Saver vacuum sealer would do as good a job and definitely have less risk of leakage.  So, I sealed it up and put it in the back of the fridge with a one pound weight (package of ground turkey meat) on top.

Over the next 36 hours I flipped the the package over about once every 8 hours and replaced the weight on top.  The goal was to avoid one side spending too much time sitting in the salty/sugary liquid that formed.  Around breakfast the second day, I removed the package from the fridge.

MMMmmmm, questionable yellow fish juice.  I would have been pretty ripped if this stuff had leaked all over my fridge as was the chief complaint with the plastic wrap method

The meat felt much firmer than it did when it went into the bag and the size was noticeably smaller.  I cut into the package over the sink to minimize fish juice spills and pulled out the salmon sammie. 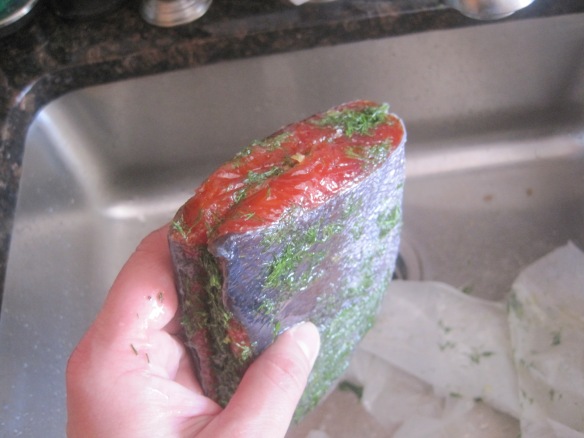 Much darker than when we started.  I rarely cook meals for the blog in the morning and couldn’t believe that I got natural light everywhere in the kitchen at 9AM.  Who knew?!?!   Also, nice thumb there, Mr. Mutant Baby Thumbs

The pieces came easily apart and I lightly scraped off the dill, zest, and unabsorbed sugar/salt.  Then rinsed each piece lightly under cold water to remove any excess ingredients followed by patting each piece dry with paper towels.  Which left me with this.

These were significantly flatter and not nearly as thick as when the filet was whole.  No comment on how they weren’t really the same size at all despite my earnest attempt and what I claimed earlier

Even with a little help (Conman to the rescue!), I knew I couldn’t consume both of these pieces in one day so I put one into a fresh food saver bag and sealed it up for the following weekend.  The other piece I got to work on with the sharpest, thinnest carving knife I had.

The goal was to cut the pieces as thin as possible, but also to slice on a heavy bias so that each piece had some decent surface area.  Took some practice, and the first couple cuts were subpar, but eventually I got the hang of it.

Dece contrast shot showing how much darker the pieces looked before they were sliced thin.  They looked like salmon jerky in their whole form but sliced up tender and buttery

Once I had a bunch of pieces sliced, I quickly tacked on another round of temper tantruming when I realized I didn’t have the perfect bagel that I was looking to eat this on.  Nothing less than a Bagels-4-You everything would have done the trick at that moment.

I reluctantly accepted my fate and went with a little wheat toast, cream cheese and capers. 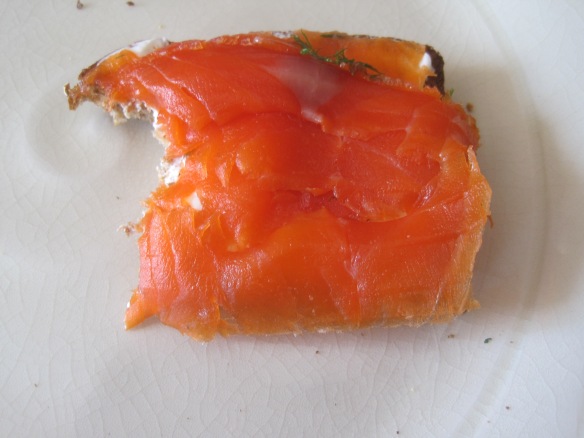 There were multiple open faced sandwiches made that morning, this one just happens to be the smallest and makes me look the least gluttonous

The texture of the fish was very soft and, to use it again, buttery.  I don’t say this often but it really did melt in your mouth.  The fishy flavor normally found in lox was very mild and less pronounced than the dill and citrus from the cure.  I think the traditional way to serve this would have been with some aquavit or mustard or creme fraiche or maybe all of them, but nothing beats cream cheese and capers for me.

I would absolutely make this again and can’t wait to. I much preferred it to the inconsistent smoke flavor found in most packaged smoked salmon in stores.  Really really tasty.

Pete’s Charcutes is no longer the most seldom used category on the site!  Uncle Timmy?  You ready to talk about your stupid recipes for jerks?