As usual with these posts, people were coming over, I had too much stuff in my fridge and freezer, so I made something with that stuff.  This time around, I had a pound tub of lump crab meat from Costco that was nearing its expiration, and a bunch of different meat options to pair it with.

Despite the warm weather, I went with short ribs since I had some nice looking ones in the freezer and just received an additional payload of them from Uncle Billy.  When deciding how to incorporate the crab, I looked to my love of any steak with an Oscar topping and figured I would attempt my own spin on it.

First step was to heavily season the short ribs with salt and pepper.

The return of the good camera!  Aside from at least 3 hours of braising, the other keys to awesome short ribs are tons of salt and pepper and searing all sides before braising.  Took a lot of botched short ribs before I figured this out

My largest cast iron pan went over high heat with a little bit of safflower oil until it got very hot, just about the point of smoking.  Then the short ribs went in.

While those sizzled and sprayed me with occasional “f*cksh*t!” and furious arm rub inducing splatters of hot oil, I did initial prep on some carrots, onions, garlic, and celery.  I was trying to make a braising liquid that would be sauce-like, so I used the processor to chop the aromatics down like I would with an osso bucco.

Once it was all well chopped, I dumped it into Lil’ Blue which had been heating up a little olive oil over medium heat on the stovetop.

After going through this process multiple times, I’m not really sure this does anything.  Nothing really browns because there is so much liquid from the processor, and the smell doesn’t really change much.  Yet, if you asked me whether this was necessary I’d likely insist it is and pretend I know what I’m talking about

After a few minutes of the aromatics cooking, I poured in a half bottle of white wine, a 4 ounce can of V-8 and a 4 ounce can of tomato sauce plus a couple bay leaves.  Again, I wasn’t looking for a marinara, just a sauce that would reduce well and taste equally good with shellfish as beef.  Also, both of those items had been in the cupboard for far too long and needed to get used for something. 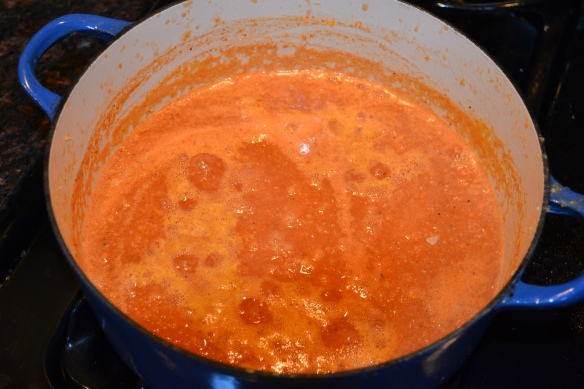 More liquid than it looked like I would need, but it always cooks down a ton during braising and if you don’t have this much you need to add cups of water during cooking.  Which seems soooo wrong, who wants beef braised in water?

With the braising liquid simmering, I preheated the oven to 325F and finished browning the final side of each short rib.

I wish I could brown stuff this well inside Lil Blue/Big Yellow, but I’ve never successfully done it without scorching the bottom of the pot.  Better to do it in a separate pan and scrape in any of the good (read: fattening) stuff

The short ribs were nicely nestled into Lil Blue and covered with a couple decorative spoonfuls of liquid over the top of each short rib, like fedoras in the douchey Dutch Oven neighborhood.

That piece to the front bugged me then and it bugs me now.  It just wouldn’t fully submerge

The braising process takes a total of 3-4 hours, so I needed to feed my guests in the interim. Because of the abundance of shrimp in my freezer, my first instinct was shrimp cakes.  The idea was just small shrimp, ground up with spices, tossed in breadcrumbs and fried in a pan; just like any other fish “cake” I’ve made.  Lets start with the food processor in mid action.

Same shot as the Grayling potstickers post, just the egg yolks for binding

For the spices I resisted the urge to go the easy route with Asian spices and a soy-based dipping sauce, only because it wouldn’t match well with the wine and tomato flavors of the main course.  Instead, I went with the simplest approach I could think of and just added crushed red pepper, garlic, and salt.

Once fully ground, the contents of the processor went into a glass bowl to let the flavors come together a bit in the fridge.

Mostly this experience made me want to make dumplings again.  That bowl looked like a delicious blank canvas

With the shrimp resting peacefully, I started working on the crab cake that would be replacing the steak as the base of this Reverse Oscar.

I’ve made crab cakes a bunch of time and usually add a bunch of other ingredients like peppers, onions and breadcrumbs in an attempt to stretch out the crab to as many cakes as possible.  On the other hand, the best crab cakes I have ever had were made almost entirely of lump crab meat and had minimal fillers.  So, I ignored the cheapskate inside me, and only added corn, egg, and a little shake of breadcrumbs to absorb the moisture from the egg.

Yes, I will happily put corn in anything, especially seafood items.  Our friend’s collective love of corn once led to an Iron Chef Corn which in turn led to incredible stomach discomfort for all who participated.  Delicious stuff, in moderation

The crab mixture joined the shrimp in the fridge for an hour or so to set up.  While all them flavors came together, Janet crawled around in the living room between Nate, Emyo, and me, occasionally pausing to attempt to eat whatever she found on the ground.  I obviously applaud her interest in trying new foods, but I draw the line when it’s Kristi’s hair or the foil from my burrito.

Once people were substantially hungry and annoyed that I hadn’t started serving food, I heated up a quarter inch of olive oil in a large pan over medium-high heat.  The ground shrimp came out by the handful, was formed into patties and dropped into a pile of breadcrumbs, making sure they were completely covered.  Once the oil was hot, the shrimp cakes went in for some fryin’. 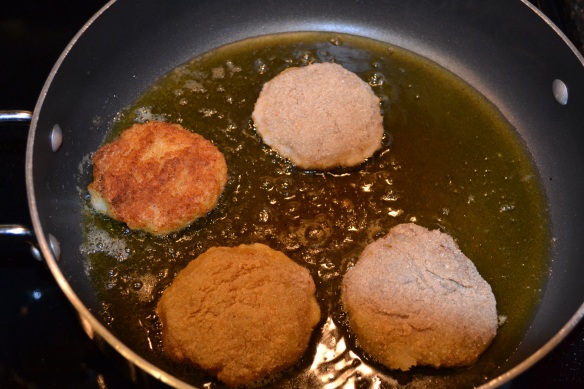 The better camera can’t avoid the lighting issues on my stovetop.  And I can’t avoid frying things to make them taste better

After 5-7 minutes on each side, the cakes were fully cooked and ready to eat.  Thankfully, Nate reminded me I hadn’t made a sauce for dipping so I threw together a caper aioli (fancy named tartar sauce) for dipping while the shrimp cakes drained on some paper towels.  Then we ate them.

At this point I was really slacking on the fotos and consistently taking awful ones where my massive head cast a shadow on the food.  My excuse: Kristi was out of town watching Auntie Kate win the NCAA D3 Women’s Lacrosse chip and the quality of imagery suffered from her absence

As Nate said, the shrimp cakes were like fried shrimp without the hassle of pulling the tail out.  I agree, but I also enjoy the texture of ground shrimp, despite the slightly more metallic taste that comes with cooked ground shrimp vs. whole shrimp.  Pretty nice little appetizer though.

After about three and a half hours, the short ribs were ready to come out. 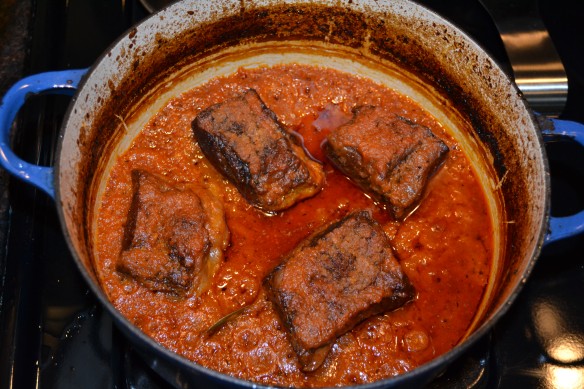 The meat had cooked to a perfect tenderness and separated from the bone easily in one piece when picked up with a pair of tongs.  Once the meat was out of the pot, I removed the bay leaves and put the braising liquid over low-medium heat to reduce it a bit for use as a sauce.

While the oil was still hot, I made some patties from the crab mixture, then tried to gingerly place them in the pan without burning myself or having the cake fall apart entirely.  I learned I had to accept one of those two outcomes, and after making scrambled crab cake with the first one, I decided to take the burns and make some nice looking cakes.

After a longer stretch than the shrimp cakes on each side, I had my crab cakes.

I know, the lighting is awful and looks like I am back in Philly.  I would have sworn cameras had become idiot proof at this point, but I keep finding new ways to disprove that with every picture I take

With all the components cooked, I assembled the Reverse Oscar.  Crab cake first, then a little dollop of the reduced braising liquid, then the short rib, and another dollop on top.  A dense little pile of flavor and deliciousness. 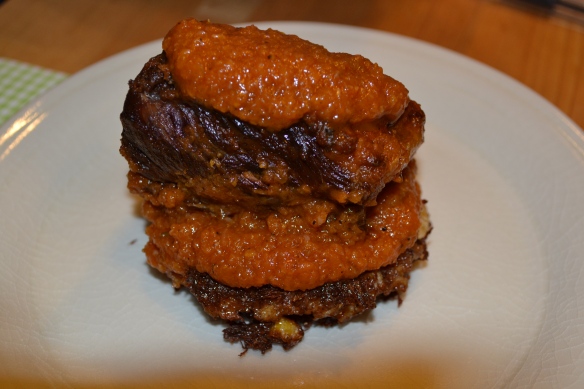 I knew this would be so rich and filling.  I love compact piles of food that are best consumed in giant bites combining every item.  My guess is most of the people who would make a statement like that have to take a deep breath before they tie their shoes and occasionally sweat from chewing gum

I had bites of the short rib and crab cake separately before combining them with every forkful.  The short rib was tender and had tons of good flavor from the braising liquid, though it didn’t hurt that it was smothered in it.  The crab cake was what I look for in a crab cake, big chunks of tasty lump crab meat with minimal other stuff muddling up the works.  The braising liquid went surprisingly well with the crab due to the white wine and the acidity of the tomatoes.

But when you put them together in one bite, wowza.  It was tough to tell what you were chewing at any given time but it all tasted so good together.  Very, very rich, to the level that all of us were filled up on those little plates, but well worth the effort.

Not sure what will be up next.  Got some stuff curing in the fridge and I’m anxiously awaiting the arrival of my new grill, but none of that will make for a post next week.  Will try not to disappoint.