Aside from my Best of Philly post, I generally avoid giving any kind of restaurant reviews on this blog.  There are 200,000 active restaurant blogs with over 95% of them located in the 25 biggest cities in the U.S.  Pretty crazy right?  Well, I made most of that up but I’m guessing it’s relatively accurate, and what I am trying to say is that area of blogging is pretty well covered.  Who needs another blog that tries to sound like Bourdain while they give the millionth opinion posted online of a Best of Boston restaurant’s seared scallops.  I’ll save you some time: they tasted good and were cooked well.

Anyhoo, instead of giving you a thousand words on Coppa Enoteca in Boston (hint: stuff tasted good and was cooked well), I decided to attempt making one of their salumi offerings at home.  For those outside Boston, Coppa does Italian dishes using all parts of animals from land and sea, particularly some of the more interesting and challenging cuts. Awful one sentence encapsulation, but I think it gives you the general idea.  Check out the menu at the link above if you want more details.

One of their salumi items is a medium rare ox heart that they slice thin and serve like prosciutto.  It was flavorful, tender, and had none of the bloody flavor I generally associate with heart.  I had to ask some nerdy questions (while Kristi tried to crawl under the bar to hide) and the manager walked me through the simple-sounding process; rub with pastrami spices, roast in a wood fired oven, chill, and slice thin.  With all the beef, lamb, and goat hearts in my freezer, I knew I would have to give this approach a shot.  Seven days, later this bad boy was sitting on my counter, courtesy of Wayfair.com.

Movies like Children of the Corn and The Wrestler give these things a bad rep.  In reality, it’s just a dangerously sharp spinning blade designed to quickly cut through meat that you hold in your hand while pressing the meat into the blade and moving your hand rapidly back and forth.  Janet will be operating it in no time!

Plan was to trim the heart, rub with pastrami spice, roast wrapped under low heat, rest, roast open under high heat, cool and slice.  The goal of the wrapped roasting was to get some additional flavor that wouldn’t be possible in a conventional oven vs. a wood fired one.

After a couple days of thawing, half of the heart from the Uncle Billy Offal Haul of 2012 was ready for prep.  Given how large the half heart was, I was pretty happy I had decided to cut it in half before freezing.

I heard they used to tape newspaper over the windows of Howard Stern’s studio to avoid upsetting other radio program hosts from what went on inside.  I am considering doing the same for one of our crisper drawers since Kristi doesn’t react well to the views of various offal thawing through the clear drawer-front

After removing from the package I gave a good rinse and patted dry before transferring to the cutting board.  Although the folks at Coppa said that they minimally trim the heart before cooking, I wanted to get rid of some of the funkier tendons and ventricles and make a few strategic cuts so it lays out flat. 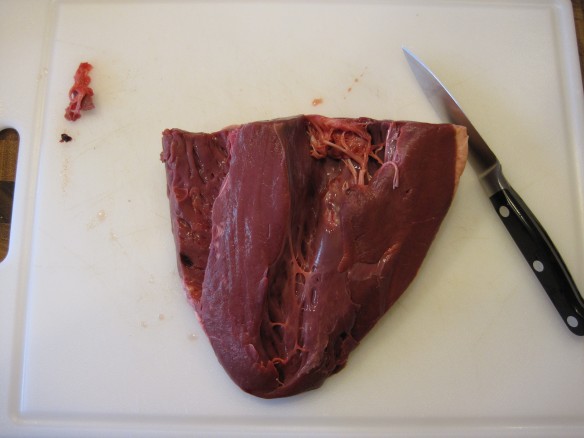 Heart is one of those cuts that looks “offal” (wokka wokka) when raw, but is indistinguishable from flank steak or any other cut of beef that has minimal intramuscular fat when cooked properly.  You may not be, but I’m excited to see what I can do with the much smaller lamb and goat hearts from Snow Farm

After a few minutes of trimming out ventricles and some of the hardened pieces of exterior fat, I made two bigger cuts to allow the meat to roll out flat.

And now for the most overdone euphemism on this site that you knew was coming: looks just like regular beef, right?

For the rub, I referenced a few sites for pastrami rub recipes and the ratios of coriander to black pepper were relatively consistent so I went with the mix of other spices that sounded best.  Final combo was a couple tablespoons of both ground coriander and black pepper plus a tablespoon each of paprika, garlic powder, brown sugar, and crushed red pepper.  Normally pastrami rub coats a salty brined corned beef, so for this prep I added a couple tablespoons of coarse kosher salt as well. 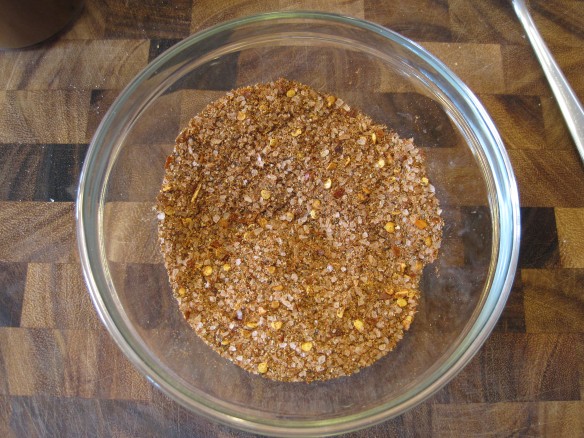 This was enough for two or three pieces of meat the size of the trimmed heart, so the rest is in a jar in our spice cabinet.  As an aside, I never understood why our parents had cabinets full of old glass jars from jams and sauces.  Now I’ve got a kid and find myself bringing salad dressing to work in rinsed baby food jars and putting pastrami rub in jelly jars.  Happens so quickly you don’t even notice it

The heart got a light coating of liquid smoke (not 100% on this ingredient in general yet) and then was packed completely in the rub so that no meat was exposed.  This is generally my approach when applying rub to a piece of meat, but I particularly overdid it this time since that’s what you expect with pastrami.

Whenever I attempt something new like this, there is always a point in the process when I either start getting nervous that it won’t be coming out well or know that I got something good on my hands.  This was the latter moment, mainly because of how completely innocuous it looked and also smelled decent

The heart was tightly wrapped in a few layers of aluminum foil and went into a 200F oven for an hour and a half.  The goal was to get the flavors from the rub into the meat and also set the coating in the process.  While it cooked, I accused Brother John of buying me a low quality power washer (I had it assembled wrong), did an awful job power washing my stairs, and generally ruined what would have been a beautiful day outside for my neighbors.

When the timer went off, I pulled the heart out of the oven and was amazed to see that it had shrunk by 1/4 to 1/3 during cooking.  I kept it wrapped since all of the juices were still held inside the foil and let it cool for a few hours on the counter before putting it in the fridge overnight.  The next day, I unwrapped the foil to check it out.

Smelled just like pastrami, even Kristi thought so, though she conveyed that with the immediate clarification that she wouldn’t be trying it despite the pleasant smell.  Friggin’ jerk mother of my child and patient wife, I’ll show her

The slow roasting process baked in the flavor, but the time in the fridge truly set the rub even though it was still damp.  That being said, I was nervous the meat might have cooked more than I wanted it to and wondered if I might have been better off letting it sit in the rub overnight and skipping the initial low heat cooking.  While thinking about this and staring at the meat like a zombie for 10 minutes, the oven preheated to 450F.

Once the oven was up to temperature, the heart went onto a baking sheet to cook on the top rack for 20 minutes, which left me with this:

Nothing I wanted to do more than cut into this and see if it tasted as good as it looked/smelled, but knew I needed to let it cool to fridge temp to make slicing easier

The crust had hardened all around so it wouldn’t completely fall off during slicing.  But, sigh, I once again had to play the waiting game while the heart pastrami cooled in the fridge for 5-6 hours.

With the pastrami cooled, it went onto the deli slicer, which I was excited to use after a test run a few nights earlier with a cooked chicken breast.  The meat went onto the handy sliding shelf and the blade was adjusted to about as thin as I could make the meat without cutting inconsistently.

I was twitching and pacing the kitchen nervously wanting to make sure I chose the right direction to slice properly against the grain. Still don’t know if I did it correctly

I had a few test slices right away since I had been waiting about 36 hours at that point to taste what I was making.  The flavor was like a cross between roast beef and pastrami and had a solid spicy kick from all of the pepper.  The slices were tender and relatively moist for a pretty dry cut due to how thin they were.  After slicing around a third of the pastrami I finally had the technique down and was getting some consistently good thin slices

There is a guard so you don’t have to hold the meat on the slicer but it’s a little clumsy. So, you know, it makes sense for its clumsy user to operate it barehanded 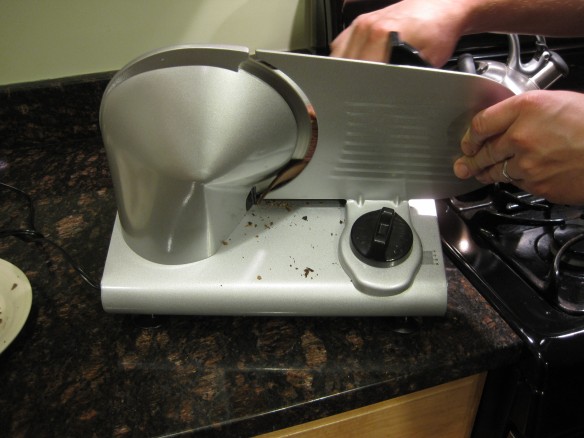 Gotta stop using the Increasingly Awful Point and Shoot camera since it’s consistently blurry when trying to capture motion, especially in low light and while the flash fixes that, it makes food look like plastic kids toys

Not sandwich sized or anything, but pretty diesel

With each pass of the slicer, I was hoping the meat would be a little pinker in color toward the center, but I never found it.  My original goal was to cook it to about medium but I missed the mark, confirming my fears about overcooking it.  However, because the initial cooking was over low heat, the juices were still locked in and the meat wasn’t too dry.  Best served with a little toast and mustard.

Not sure why I serve every headcheese and salumi I make like this, but it is generally a winning combination. It’s also what I have in the fridge

All-in-all, it came out pretty well and I have another half ox heart in the freezer to make a second attempt at some point in the near future.  Might need to get some more details on the roasting process at Coppa next time I visit, but I think a few small tweaks will improve an overall decent dish greatly.

And with that, the queue is empty, but I gots some ideas for this weekend.  Also, mildly uninneresting note, I wrote this whole thing while on a flight to Las Vegas for work.  Surprisingly efficient use of time.

Might be a rebranding of this page coming soon, getting a little sick of the DB angle.