On the camping trip that featured the hogs head barbacoa, my friend Conor brought along a couple pounds of oxtail from our JP supermarket.  We browned them in a pot with some spices and a quartered onion, covered with water, and set the pot on the edge of the fire to simmer.  A few minutes later our friend Marshall got back to the campsite, dumped out the water, stuck the oxtails in a pan on the center of the fire, and covered them with a pound of sliced bacon (unseparated) and a block of ice.  I’d describe the experience as similar to watching someone make food while they are sleepwalking, but with more violent rage and foul language from me.  Anyway, the oxtails burned, we shifted our attention to the hogs head, and Conor and I agreed to make another attempt at oxtail soup sometime soon.

Two weeks ago we held our annual fantasy football draft and for the first time in the eight year history of our league, the draft was not held in a hotel room at a casino.  The downside was that only 5 members of the league convened in Boston with the rest online elsewhere.  The upside was that there was a kitchen to make food instead of having to eat crappy central connecticut pizza.  Sounded like a perfect chance to take another crack at oxtail stew.

I have lost 30+ minutes, multiple times, looking at and poking products in the meat section at Hi Lo Foods

Oxtail is just the tail of a cow, skinned and chopped into sections.  Hard cartilage/bone runs down the center of the tail with muscle, segmented by cartilage and surrounded by a thin membrane, running up the sides.  Its an extremely popular food item in the Caribbean, mainly in stew form.  Most recently it got a little media coverage when Elvis Dumervil of the Denver Broncos claimed he lost 15 pounds in the offseason just by no longer eating oxtail. Back to the cooking.

I started off the stew, in a homage to my oldest friend (and enemy) Marshall, with a half slab of chopped bacon that I browned in the stew pot.

While the bacon cooked I trimmed excess fat and cartilage off the oxtail pieces. 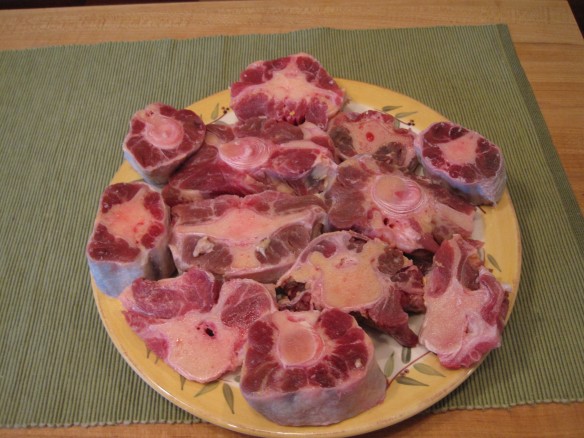 It was tough to tell how far to go with the trimming, so I left on anything that didn't appear to be fat

Once the bacon was cooked I removed it from the pot and reserved it.  I then browned the oxtail pieces in the remaining bacon grease. 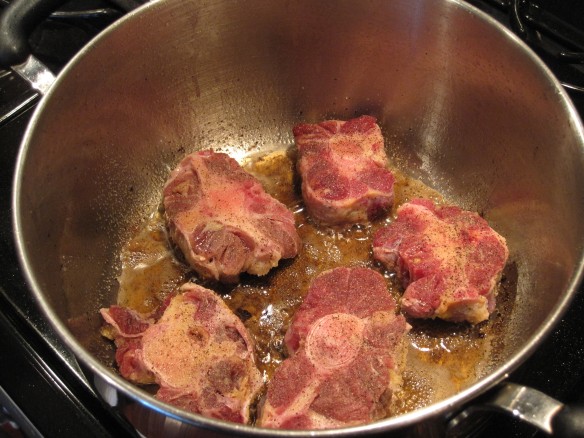 Seasoned with salt and pepper and quickly browned on both sides. Had to cook them in three waves due to space 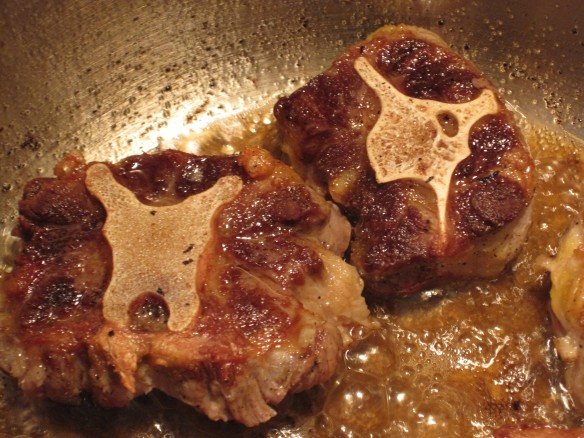 While the meat browned, I got to work on prepping the base of every stew: carrots, onions, and celery.   When I asked my wife to grab me a couple “good sized” carrots at Hi Lo, here is what she got for me. 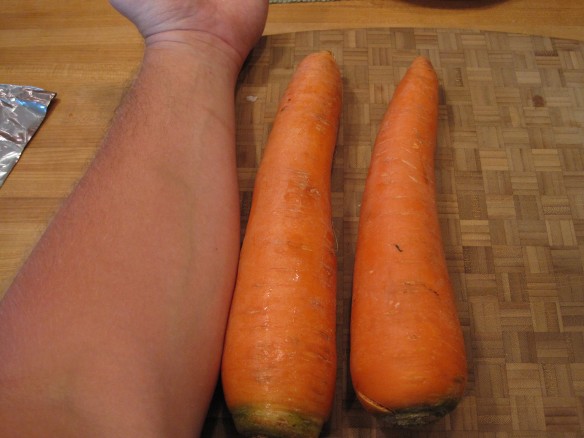 "YOU MEAN THERES CAR'TS OUT THERE THIS BIIG?" Little Anaconda/Ice Cube reference. What?

With a bit more effort than usual, I got through the process of chopping the carrots and then the celery and onion.

That pile represents one half of one of the carrots. Reeeeeeediculous

The last batch of the browned oxtail was removed from the pot and put to the side until the base of the stew was ready for them.

Once the onions were translucent I added a few big pinches of fresh thyme. 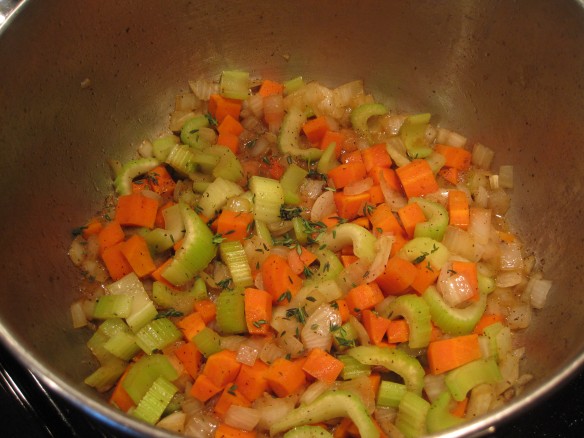 This picture could be from many different past and future posts

At this point in went a few smashed garlic cloves, a couple bay leaves, chicken stock, and red wine.  Once I was sure everything had deglazed off the bottom of the pot, I let the liquid simmer for a few minutes, added the oxtail, covered and cooked for four hours. 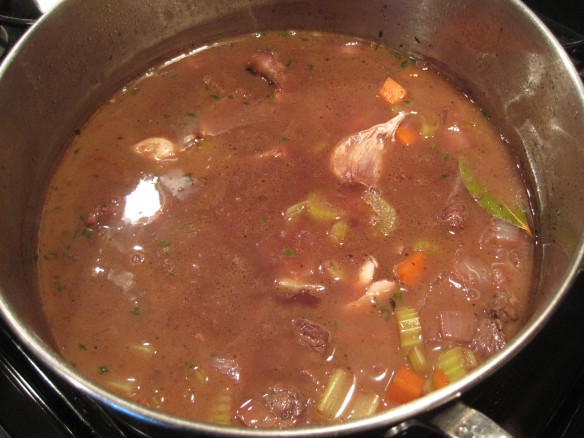 Once again, I make a hearty stew on an 85 degree night. Still, looks delicious

During the four hours of stewing I cut the remainder of the carrots into sticks and roasted them.  I also engaged in some fantasy football panic, an online mock draft, and 1,500 calories of Shuman’s buffalo chicken dip. When I checked the stew, the meat was fork tender which was what I was looking for according to the oxtail research I’d done online.  There was also a little time pressure with the draft starting in thirty minutes.

I removed the fully cooked oxtails and set them to the side.

Thanks to Buschy for taking pictures in between swallowing back vomit. He is about as adventurous with food as a breast feeding infant

Because the mirepoix had basically cooked down to mush, I poured the remaining liquid through a strainer and pressed the solids down to make sure I got all of the juice back.  Once the liquid settled I skimmed off excess fat and returned the liquid to the stove.

The remaining liquid. At this point Tim would have walked in and insulted the stew, then me, then the clothes that I was wearing, and then punched me. I was glad he was probably 6 hours into his ride home from Little Compton

Both had a few burned pieces, but I guiltily really like that flavor 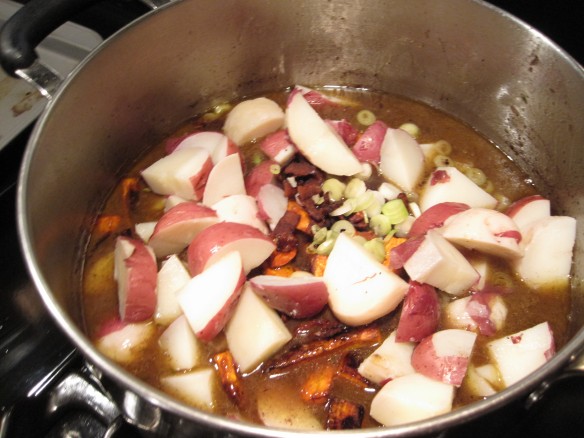 I hate wasting food, and those red potatoes are admittedly leftovers. But I would have just cut and boiled fresh potatoes then added them, so I don't think it changed the stew much

…plus the oxtail to make this completely awful looking pot of food:

I let this simmer together for fifteen minutes or so

And then… I turned the heat off because the draft was starting.  Probably for the best; in my experience soups and chilis are always better after they have rested for a bit.  After two sweaty and technology error-laden hours of auction drafting, I decided to turn the heat back on the stew.  My first bowl:

Once I had the bowl sitting next to my computer, I fully understood how effing stupid I was to make a stew for an online auction draft. I blame it for any stupid picks I made in the draft. And any typos in this post

The flavor of the stew was awesome; we went through a loaf of painfully hard bread just dipping it in the liquid. The problem was that the  Caribbean recipes I saw made a clear point not to cook past fork tender since the meat will fall off the bone.  So I did that without questioning it.  But it really sucked pausing while eating spoonfuls of stew to gnaw the meat off of the oxtail.  If I had taken the time to think about it, I would have just cooked it an extra hour or two to make the meat fall off the bones.  Oh well, looks like there will be a third round.

And Con, you still owe me for the oxtails based on our bowling bet.

Next week, the only time I have ever cooked something out of anger towards the animal.