I love osso bucco and generally order it whenever I see it on a menu.  Actually, let’s say a reputable restaurant menu.  I learned that lesson a few years ago at a subpar Italian restaurant that clearly didn’t understand the importance of slow cooking the veal shanks leaving me with fat and chewiness.

Despite my love of the dish and braised meats in general, I’ve never cooked osso bucco myself.  This is likely due to my love of using cheap cuts and not being willing to spend the cash to purchase veal shanks.  When I noticed something labeled “shin steaks” at Stop and Shop, I recognized an opportunity. 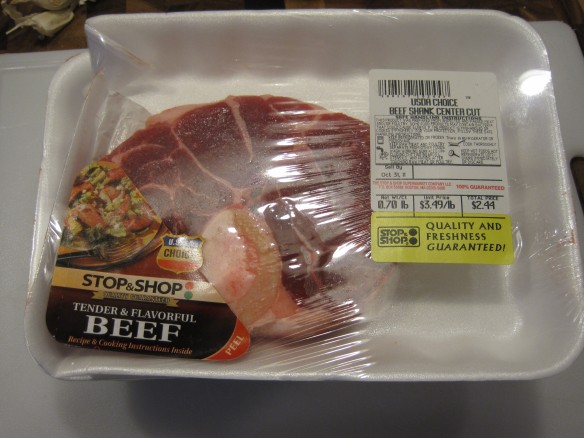 I didn’t need to go to the butcher’s window to get an explanation on this; I figured it was basically an osso bucco cut from a full sized cow.  And, hey, the price is right for this cheap DB bastid!

According to Wikipedia (I was going to pretend I knew this before a crisis of conscience), osso bucco means “bone with a hole”.  While a shin steak from a full-sized cow qualifies as osso bucco, it still isn’t the traditional veal variety.  It’s basically a cross section slice of a beef shank.  So, lets call this version of the dish Awso Bucco (copyright Conor Russel inc, 2011) moving forward.

I started out by trimming the fat and outer connective tissue from the shin steaks then tying them up with kitchen twine to prevent them from falling apart. 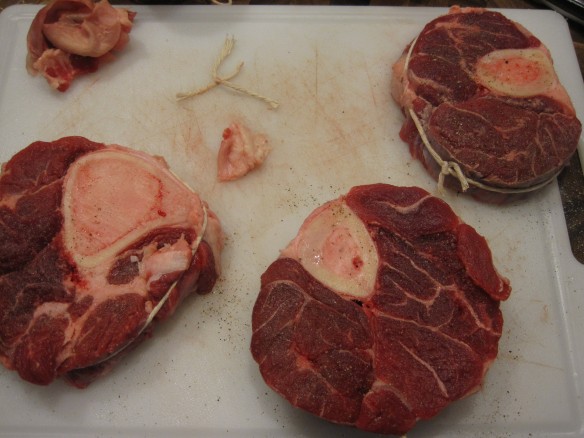 That one on the far left was a total rip off at $2.86 due to the large bone. I’m not the Monopoly man over here!

The shin steaks were seasoned heavily with salt and pepper then went into Big Yellow with a little olive oil to brown for a bit. 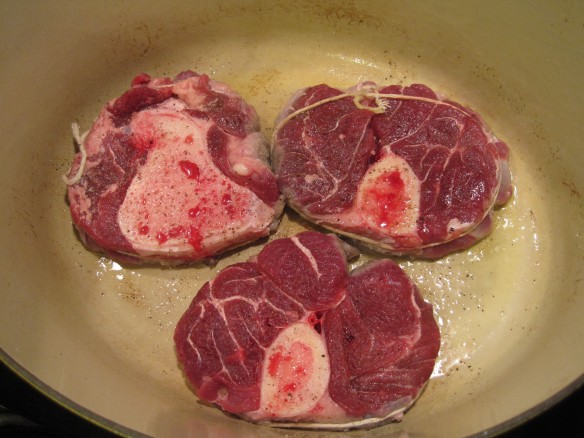 To continue with the Monopoly references, the shin steak on the far left was like Baltic Ave.  You knew it would be fun and better than expected, but you’d be pissed if it was your only option

While the steaks browned, I threw an onion, a couple ribs of celery, a few peeled carrots, and 4 cloves of garlic in the food processor and gave them a good choppin’. 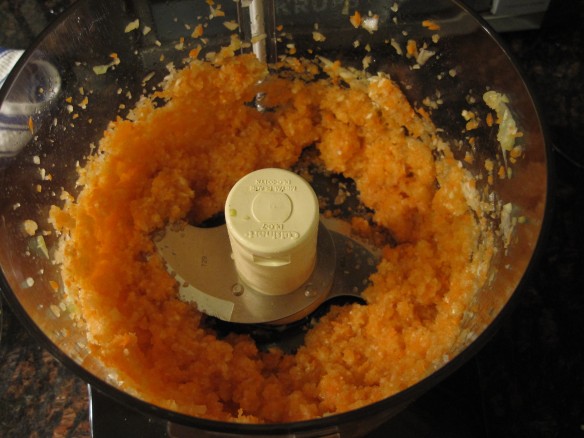 Saw this in one of the recipes I referenced. It made complete sense to me instead of chopping the vegetables small by hand.  You could see how much it would break down and make for a nice texture after braising

After about 7 or 8 minutes, I flipped the steaks and started browning the other side.

I was going to pretend the kitchen twine wasn’t noticeably missing from this picture but figured someone would point it out.  The steaks were too thin and I am horrible at tying knots, so the string had to go

After a few more minutes I pulled the shin steaks from the pot and dumped the contents of the food processor in to cook for a bit. 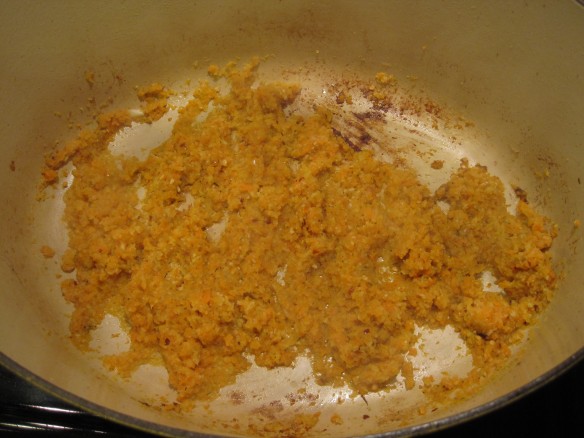 This type of heavily food processor-ed vegetables never looks right, but previous attempts include the delicious mushroom paste I made for venison tacos and my traditional ginger, garlic and onion base for fried rice

Since the food processor basically makes a garlic/onion/carrot/celery juice with pulp, the vegetables don’t really brown or caramelize, they just cook.  Not sure how to expound on that eloquently, but there are no visual signs that things are cooking once you put them in the pot.  After a few minutes you just shrug your shoulders and add some tomatoes.

Went with a 14oz can of diced tomatoes and a few spoonfuls of tomato paste. Deprived you of a self-taken pour shot here, but I think you’ll survive

Then a bottle of white wine once the tomatoes have cooked with the vegetables for five minutes.

Once the braising liquid reduced a bit over high heat, I threw in a couple bay leaves and strategically placed the shin steaks back in the pot.

By strategically placed, I just mean that I made sure they weren’t pressed against each other. I was the middle school chaperone to this Awso Bucco dance

Lid went on and Big Yellow headed into the oven for three hours at 300F, checking occasionally to make sure that too much liquid hadn’t cooked off.  After the full three hours, you should have something that looks like this:

Looked good, but wanted to reduce that liquid a little bit

Since there was a little excess liquid, I took the lid off and cooked uncovered for another 30 minutes.  Which was a perfect cue to start the mushroom and corn risotto I chose to pair with the Awso instead of polenta.

I like polenta when it’s crispy fried in cake form, but I wouldn’t do that well so I decided to go with risotto for bringing in the sweet corn flavor

After 30 minutes uncovered, the liquid had mostly cooked off, and we had a decent looking pot of braised loveliness. 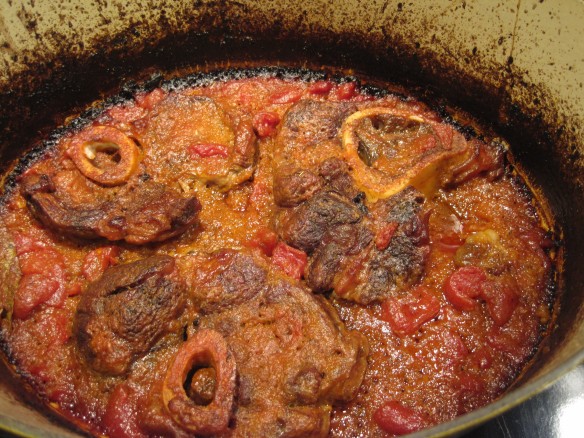 Kristi was game for eating this, but I was already looking at the marrow in her portion knowing she wouldn’t touch it

Very simple meal to plate; pile of risotto, then the Awso and a big spoonful of the sauce from the pot over everything.

That is a perfect plate of 20-degree-day dinner. Best enjoyed with a giant glass of red wine and a fireplace

The sauce was rich and tasted strongly of white wine in very a good way.  There’s just something phenomenal about slow cooked sauce with tomatoes, mirepoix, and white wine.  The Awso was the perfect texture; not quite fall-apart stew meat, but insanely tender and delicious.  The sweet risotto was a solid counterpoint to the richness of the Awso, though the corn got a little sticky in the cooking process.

With all of my marrow talkin’, you didn’t think I’d actually forget to mention it? 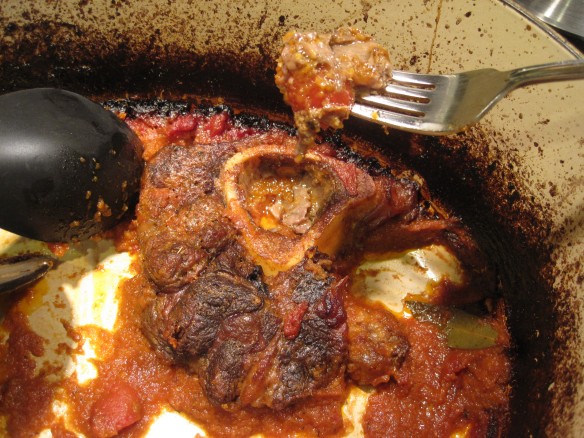 The marrow was good, had all the best flavors from the sauce and a melt in your mouth texture.  Wish I had made some bread to smear it on.

Next week we’ll be talking pies.