In addition to her grandparents, Janet is blessed with having two great grandmothers, Alice and Janet (the source of her name), as well as a great aunt through marriage, Joyce.  What’s really amazing is that she also has a great-great grandmother, Simone.  Now, in the Ryan family we called our grandparents Grandma and Grandpa, but things are done a little differently in Kristi’s family.  Janet is Grandma Net, Alice is Grandma Ali, Joyce is Joycie, and Simone is Momere (pronounced “Mommer” in the VT translation of French).  Hence the name of the post.

Momere is 98 years old and still lives on her own down the street from Net and Kristi’s parents.  She mostly wears clothes that she made herself, has a husky laugh that makes me feel like I am pretty funny, and keeps her house at a balmy 80 degrees using a wood burning stove in the winter.  I’ve had a few queasy mornings there after after the family Christmas parties. 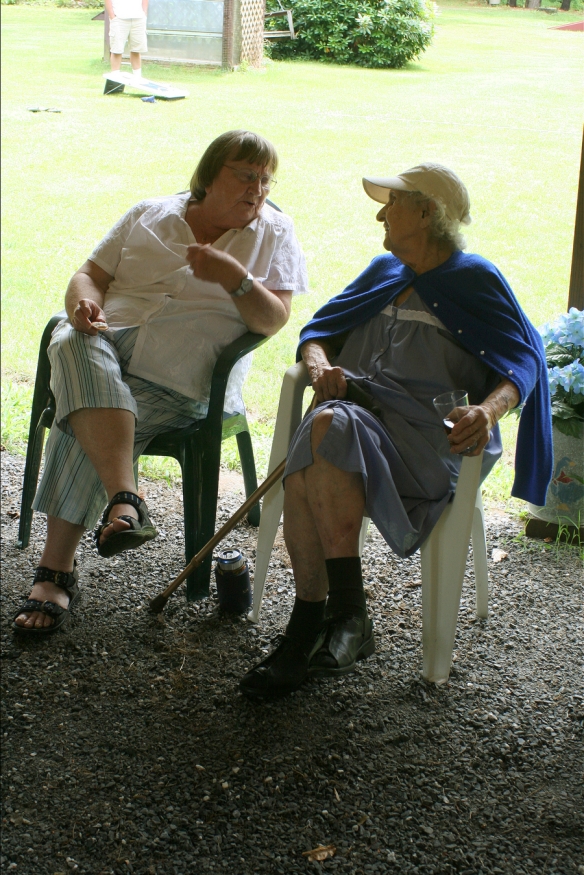 Joycie and Momere chillin' at one of the summer parties. Note the baggo (or "cornhole" in Ryan terms) game going on in the background. Thank god it's become the lawn game of choice at family events since I almost killed three bystanders the last time I attempted to play horseshoes

In the time I’ve known Kristi, Momere’s eyesight hasn’t been great which has limited her ability to cook, but everyone in the family talks often about how good her cooking is.  Kristi has told me on multiple occasions about how amazing her baked beans are and since I’ve never cooked baked beans myself, I decided recently that I wanted to get my hands on her recipe.  The only obstacle was that unlike my need to write down recipes since I only cook things once or twice, Momere has an arsenal of dishes that she’s cooked hundreds of times over nine decades.  So, the recipes are entirely in her head and she probably hasn’t had to measure out the proportions for the past 20-30 years. 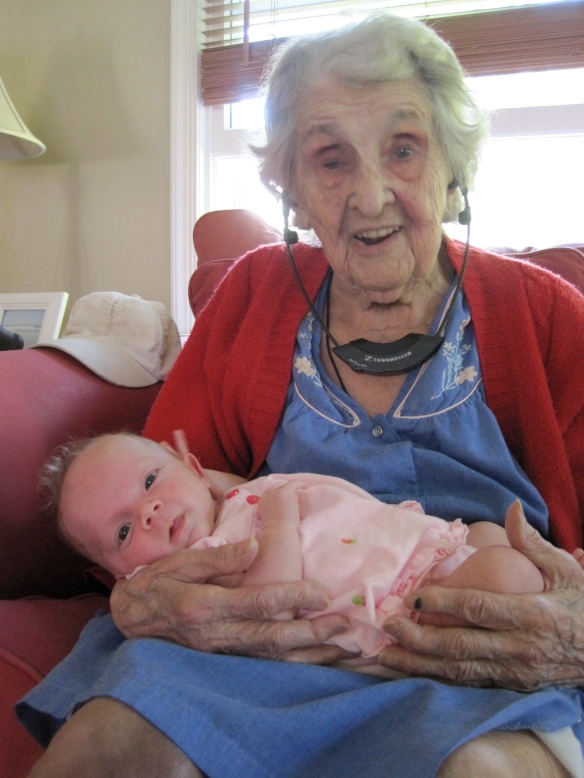 Janet loved hanging with Momere. And, no, she wasn't DJ'ing, that's a new hearing aid which seems to work much better than previous ones

At Casey and Mark’s wedding a few week’s ago, Aunt Tiffany and I asked Momere to share her recipe for baked beans.  As she said, the proportions are all to taste, but the key ingredients for her recipe were soldier or navy beans (“careful to pick out any rocks or bad beans”), salt pork (“always look for the pieces with the least fat and most meat”), maple syrup, white sugar, and mustard.  She also gave specific instructions on cooking time (“at least 6 hours at 275”) and a good way to test whether the beans are ready (“they are done when you blow on them and the skin comes off”).

With that information and a little online research, I was ready to get started by picking through, rinsing and soaking a pound of navy beans. 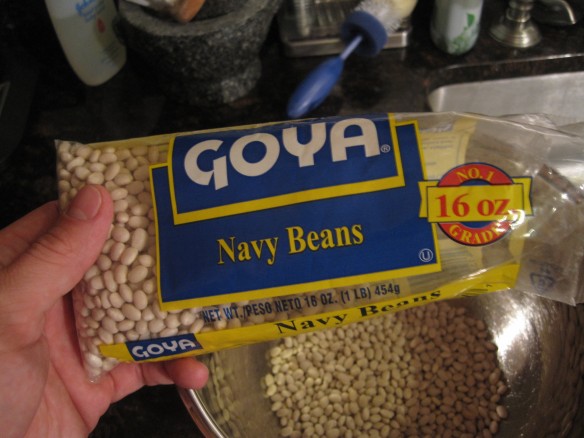 Couldn't find soldier beans, but navy beans were given as a second option. I am usually lazy with beans and use the canned version but this effort was worth an exception

After an overnight soak, I had this underwhelming result. 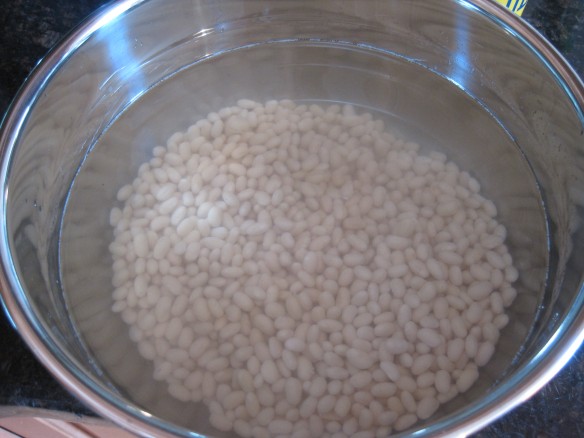 I think I expected them to quadruple in size overnight or something, but they only got a little bigger

I strained and rinsed the beans again then reserved them while I prepared the rest of the ingredients.  Next up was the salt pork which Kristi picked up for me at the grocery store. 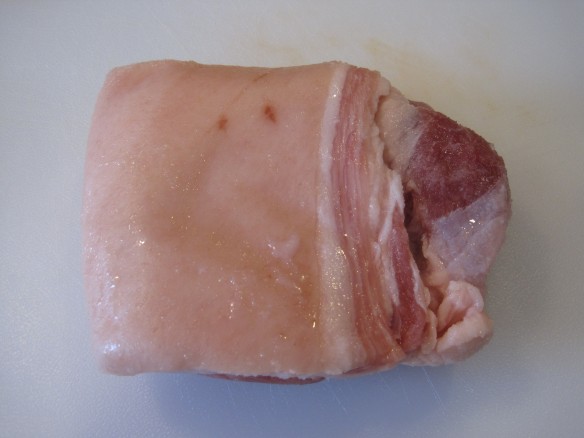 I hadn’t cooked with salt pork much previously aside from attempting to use it a couple years ago after being introduced to it at Ryan Thanksgiving.  My Aunt Jeannie uses slices of salt pork draped on top of the turkey to flavor the bird and keep it moist, but I mostly tried and failed to use it in breakfast preparations.  It’s really salty stuff, so after cutting off about a third of the slab to use, I rinsed it thoroughly to remove excess salt, then transferred to the cutting board to trim the rind off. 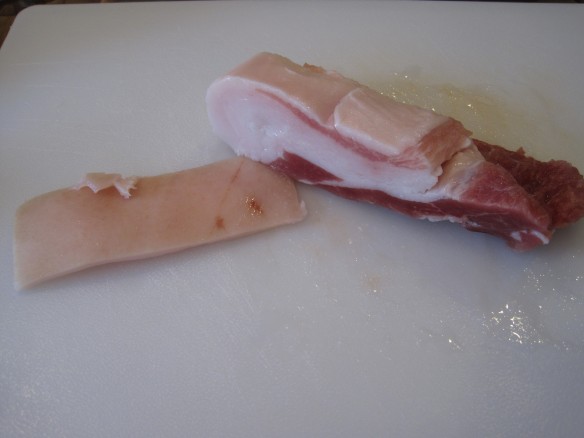 I think the rind is skin, but not sure about that. Also, salt pork is made with fatback, so even a meaty piece still has a lot of fat

Most recipes called for 1/4 to 1/3 of a pound of salt pork or bacon per pound of dried beans, but since I like my beans salty and porky I erred on the high end and used a little under a half pound, which I cubed into small pieces.

I knew the fatty pieces would almost completely disappear during cooking leaving only delicious flavor. Oh, and fat.

Next step was giving a yellow onion a medium dice and measuring out some mustard.  As I researched online, most recipes called for ground mustard, but I really got the sense from Momere that she meant prepared mustard when she gave the recipe.  So, I went with my ample gut, and decided to go with Grey Poupon as a semi-homage to Momere’s French-Canadian heritage.

Although I was planning on a quarter cup, I was totally guessing since I had no idea what the prepared equivalent of 2 tablespoons of ground mustard would be. But there was a third of a cup left in the bottle, so that's what I went with.

To make sure there wouldn’t be clumps of individual ingredients and everything would be evenly dispersed, I decided to combine ingredients prior to adding the beans.  Starting with whisking together the mustard with the maple syrup and a little water.

Action shots!!!! I was really enjoying myself more than made sense at this point

Per Momere’s recommendation, I began taste testing the liquid since it was key to the success of the beans.  I started with a half cup of maple syrup and a couple tablespoons of white sugar but added more of both until it got to the sweetness level I was hoping for.  It ended up at around 3/4 cup of maple syrup and 1/4 cup of sugar which was a little sweeter than I wanted, but it would be diluted by adding a few cups of water before cooking.

Once the flavor was right, I added the salt pork, onions and a couple tablespoons of minced garlic. 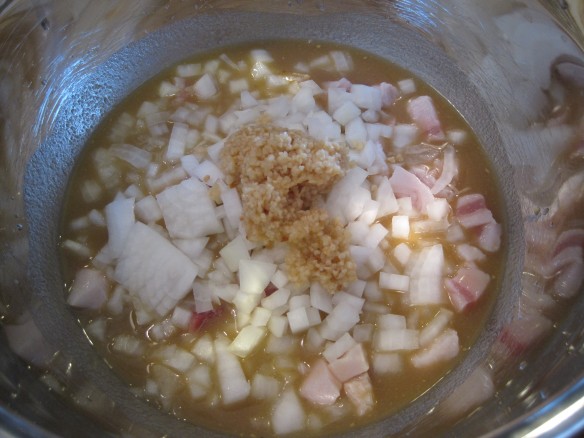 Worst kept secret on the ADB blog: I keep a jar of store-bought minced garlic in the fridge for when I am out of fresh garlic or feeling lazy. Both were the case on this day

Stirred in the beans, about 2 1/2 cups of water, a couple tablespoons of fresh ground pepper and then the whole bowl went into the smaller cousin of my favorite Le Creuset.

This was looking lighter in color than I expected but I figured the beans and sugar would darken during cooking. Also, sometimes when I post pictures of this Le Creuset in use I feel like I am cheating on my main squeeze, Big Yellow

The lid went on, and this headed into the 275F oven for 6 hours per Momere’s instructions.  While that cooks, here are some interesting Momere facts:

– She has 27 great grandchildren and 15 great-great grandchildren.  Blows my freaking mind.  When I was young I remember showing friends the picture of my oldest brother John as a baby with our father, grandfather, and great grandfather shortly before he passed away.  I thought it was amazing that my brother actually met his great grandfather.
– When Momere was 48 her husband passed away and she needed to find employment to support herself.  In a show of incredible determination, she put herself through nursing school and worked for an additional 30+ years before retiring at the age of 80.  By contrast, I left my relatively cushy job to go back to school when I was 29 in the hopes of finding an even cushier job.  If the previous sentence was shown to a group of seniors along with a picture of me eating a sandwich, there would be universal head shaking and a resounding chorus of, “they don’t make ’em like they used to.”
– After Momere’s husband passed away, it was just her sister, Marcienne who was also recently widowed, in the house with her.  Momere Marcienne (as she was called by the family) and Momere were married to brothers and had brought up their two families in the same house.  They lived about 6 houses away from Kristi’s family so Momere Marcienne and Momere often took care of Kristi and her twin Kate when they were babies and occasionally after school while their parents were at work.  They each had their own twin, and while I love Momere,  I gotta side with Momere Marcienne since she was on Team Kristi. 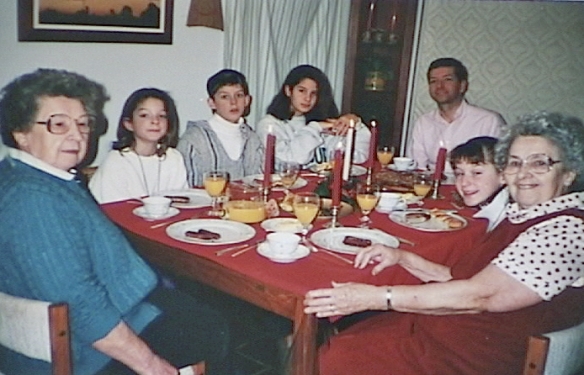 Momere Marcienne is on the left, Momere is on the right. While my head is exploding with comments on my wife as well as my brother and sisters in-law in this picture, let's keep this a nice blog about Momere and her awesome baked beans, okay?

Back to the cooking.  After about four and a half hours in the oven, I pulled the beans out to check if they needed a stir, which they did.

The change in color and rich aroma were very encouraging, and stirring the beans up helped avoid the top layer getting too dry and dispersed the liquid throughout the beans.  After another hour and a half I pulled the beans and had my first taste.  The flavor was great, exactly what I was hoping for, but the big test was Kristi.  I couldn’t have been happier than when she ate the first forkful, then the rest of the small bowl I’d prepared, and said the flavor was right on.

Since the beans were still slightly firmer than I wanted them and there was a good amount of excess liquid, I removed the lid and put the beans back in the oven for another 40 minutes at 325F.  Which got me here: 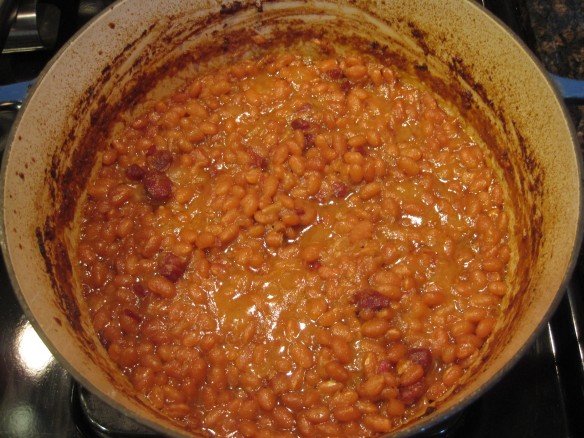 You know that looks freaking delicious, and the smell matched

The flavors came together very well and each bite had a little salty pork flavor, a little maple, and some tartness from the Dijon mustard.  Just the right level of sweetness too, not the over-the-top sugary sweetness of Bush’s Maple Cured Bacon Beans.  They had a very rich flavor, but not a heavy richness, perfect with a couple sausages or hot dogs. 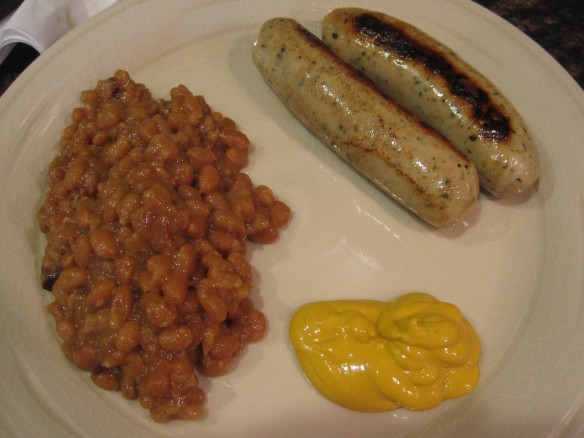 I OD'ed on these Al Fresco chicken sausages a few years ago and am just now reintroducing them to our meals. They were a good compliment to the beans, as was the yellow horseradish mustard from some Buffalo place that Buschy left in my fridge

The beans weren’t quite as soft as the canned variety, but I wouldn’t say that made them any less enjoyable, just clear that you weren’t eating canned baked beans.  I’d likely do a little more lid-on cooking time and a little more water in the future if I was hoping for softer beans.  I’ll also listen to Momere and cook them until the skin falls off when I blow on them (which it didn’t on mine).

Anyhoo, they were really good.  The next step is to attempt making these the next time I visit VT and see if Momere has any suggestions or changes.  I am already feeling a little nervous about that.  Here’s a poor attempt at a recipe.

Preheat oven to 275F.  Whisk together mustard, maple syrup, water, and sugar until thoroughly blended.  Stir in beans, pork, onions, garlic, and pepper.  Place in medium sized pot with heavy lid and place in oven for 6 hours (7 hours for softer beans), stirring once approximately halfway through cooking.  Increase oven temperature to 325F, remove lid, stir once, and cook an addition 30-45 minutes or until excess liquid has cooked off.  Remove beans from oven and they are ready to serve.