I need to come up with a good name for mixed grill that sounds cool.  Bollito Misto would be a cool thing to call it but that’s a mixed boil, and all the other foreign terms for mixed meat grill-fests refer to a specific collection of meats.  Please provide suggestions for what I should call future events where I fish interesting stuff out of my chest freezer to grill up.

Anyhoo, Lamb, smelts, and cow parts were on the menu for Saturday and good golly was it rewarding.  Let’s check out the vacuum sealed lineup. 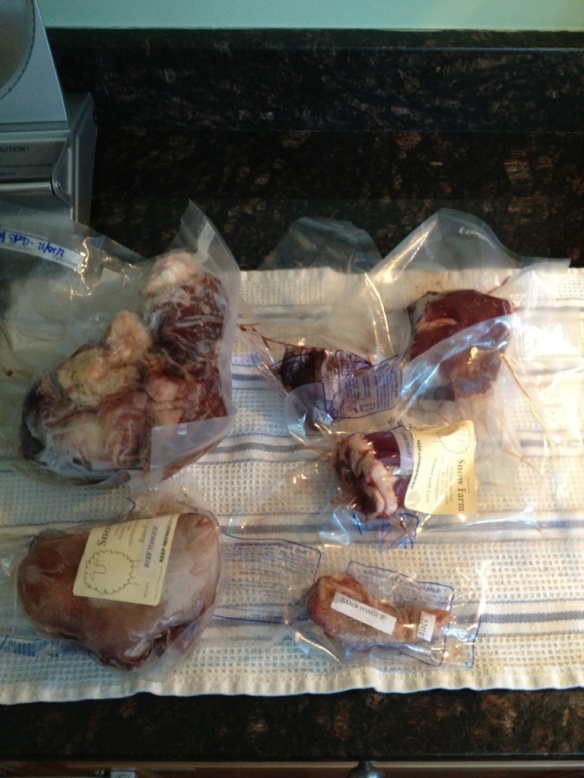 That’s a half kidney, half beef tongue, a lamb tongue, two lamb hearts, and a hanger steak.  The steak was from Uncle Billy’s cow, the half kidney was leftover from a previous experiment with steak and kidney pie, and the tongues and hearts were from Snow Farm.

David from Snow Farm has become the equivalent of an email pen pal, but one that occasionally asks me what “parts” I’m looking for when he is butchering some of his naturally raised lamb, pork, beef, and goat.

The hanger steak came over in the creepy cooler I picked up on Kristi’s grandmother’s porch and the tongues and hearts are from the bag David left for me in a driveway in Lexington, MA.  I was extremely excited to cook both of them.

The item I was less excited about was discovered in my freezer a few weeks ago.  In a good life lesson to search your friend’s pockets before they enter your apartment, a 1.5 pound bag of smelts was hidden between Janet’s waffles and some frozen corn.  In general I like smelts, which are basically a large sardine that is usually fried and eaten whole (with the guts and head removed).  The frozen version kind of scared me, and the fish stank they leaked into my fridge when they defrosted didn’t help my fear.

While the smelts finished defrosting, I started initial prep on the meat.  First up was the hanger steak.

Funky looking stuff when it isn’t trimmed.  I was positive this was some sort of neck or cheek meat when I pulled it out of the cooler originally just because it looked so bizarre

Apparently hanger steak (called that because it hangs from the diaphragm) comes from the same general area of the cow as the skirt and flank steaks.  Like those other cuts, it needs be marinated, cooked medium rare and sliced thinish since it can be pretty chewy, but first there was a whole lot of crap to cut away.

Big bowl of fat and connective tissue trimmed off the hanger, leaving me with… 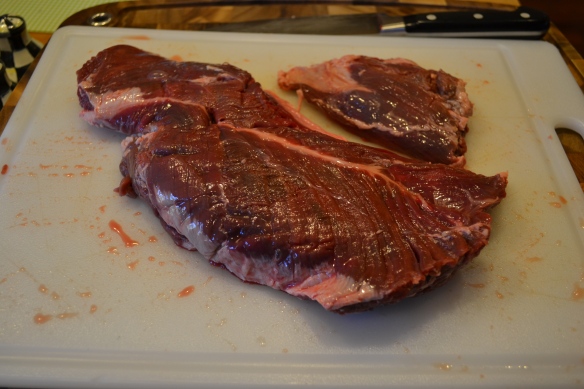 …this.  Pretty decent looking steak with a little bonus piece that was loosely connected.  Nothing makes me happier than cheap (or free) cuts of beef that actually taste good

With the steak trimmed, it headed into a marinade of Worcestershire, soy sauce, BBQ sauce, mustard, garlic, salt and pepper.  Random collection of ingredients but I also knew it couldn’t go wrong.

While all that was happening, the tongues were in a pot of salted boiling water for about an hour to get them ready for peeling.

Every time I cook tongue I like to think that it will look far more edible once it’s peeled.  Nope, still looks like a tongue.  Considering that is half a beef tongue and a full lamb tongue, it’s a good reminder of how friggin’ big a cow is compared to a lamb

Peeling tongues is always difficult to get started then easy going once you have a piece to get ahold of.  Not my favorite activity.

Back to the smelts.  With people arriving and plans of serving them tiny fishies as an app, I gave the smelts a good rinse under running water before dredging in lemon juice and shaking them in a bag full of bread crumbs, garlic powder, salt and pepper.

Despite the conniption brought on by my OCD when pan frying, it was the only way to do the smelts right so they headed into a large pan with a layer of shimmering olive oil.  A few minutes on each side in the hot oil and you had a crispy crunchy whole fish body to chew on. 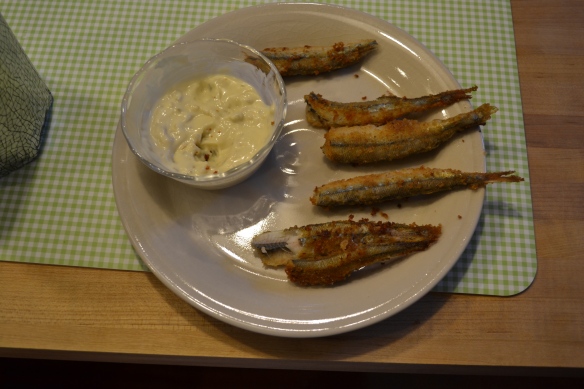 I usually make my own dipping sauces but that jar of Cain’s Tartar Sauce had been around too long and I was pessimistic that these little fishies deserved the homemade sauce treatment.  I whisked in some lemon juice to lessen the blow to their ego

The smelts were pretty dece, far better than I would have expected when I first smelled them.  You have to like the crunch of eating the whole fish body, bones and all, and the flavor that comes from doing so.  It’s a pretty flavorful experience, though I will always prefer the heads-on version I got in Sovicille Italy.

Back to the meats.  After a couple hours in the fridge soaking in a salt/sugar brine, the lamb hearts and kidney came out of the fridge looking like something from the storage room at the Mütter Museum. 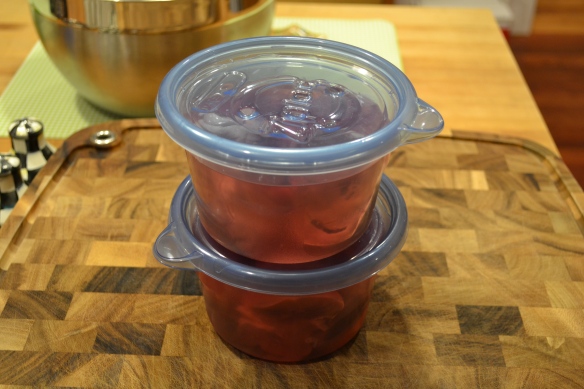 Pretty much the stuff on the shelves of the dead end basement I run into in nightmares.  Or, to those I invite over, an exciting meal for pleasant guests!

I’ve shown beef kidneys on here before, so no need to show that again pre-trimming, but lamb hearts are pretty cool looking.

Funny looking things, much less intimidating than the gigantic beef hearts I’ve messed around with previously

I cut the hearts into thirds and the kidney into cubes before putting them onto double skewers, yakitori-style.  Since I had a decent experience with grilled kidneys in Morocco when they were coated with Moroccan seasonings, I went with a similar treatment.  The lamb and kidneys both got a coating of paprika, cumin, cayenne, salt, and garlic powder plus a good drizzle of olive oil.

Forgot to soak these skewers in advance, which means I am still batting a perfect 1.000 at forgetting to soak skewers before I use them.  I think I secretly enjoy the experience of burning my fingers attempting to remove lit skewers from the grill by hand

I sliced the tongues as well and gave them the same yakitori skewer treatment.  Avoided the heavy seasoning this time and went with just salt pepper and olive oil. 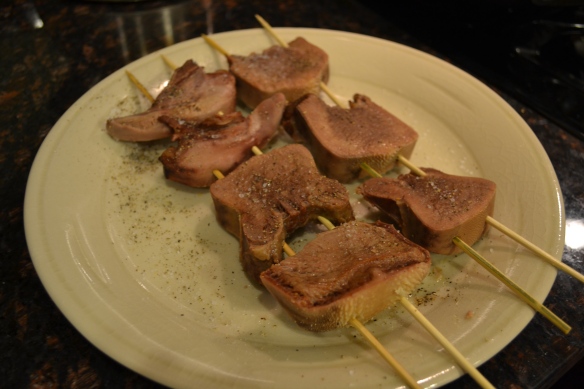 At some point I am going to cook a beef tongue perfectly, but it is more likely to be coincidence than actual skill.  Much like anything I make that tastes good

With the grill well heated and enveloping our guests with smoke, it was time to get the mixed grill grillin’.

After a few minutes on each side for the lamb and tongues skewers, a little longer for the kidneys and a little longer than that for the steak, everything was ready to come off the grill.

I sliced the hearts and tongues while the steak rested.

Was surprised that I actually cooked the hearts to a correct medium rare.  I can’t consistently hit the right temperature on hot dogs, let alone random offal from animals I don’t cook regularly 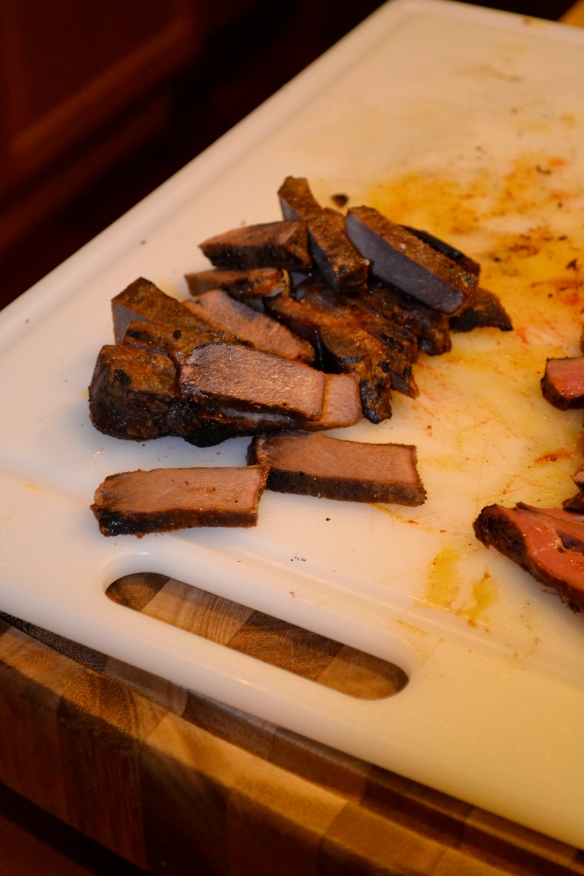 Still nice and juicy, but in general tongue isn’t a fantastic grilling meat.  Type that up and email it from your Gmail to your Hotmail so it will be saved forever and not disappear when fads like “Google” go away

This had to go back on the grill, totally erasing the faux confident move from me where I pressed a fork on the steak an said, “oh yeah, that’s done”.  I just make stuff up

With the meats all ready to go, I’ll throw a brief shoutout to our two vegetarian dishes that were a nice change of pace from the massive amounts of meat.

Kale salad courtesy of Kristi. I have been eating the living sh*t out of this salad for a few weeks now since we got the recipe from my cousin Chris.  I wanted to add 3-5 more curses to that last sentence to make it clear how strongly I feel about that kale salad 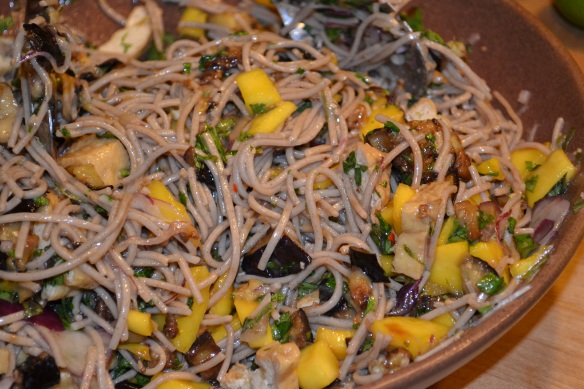 Soba noodle salad from vegetarian Taylor.  At this point I have no idea why she tolerates me, I think it’s to hang with Kristi and Janet

With everything laid out and ready to grub, we dove in until fully stuffed.  Here’s a new approach to the recap

And that’s all.  Off to Little Compton for the weekend, going to hit that fish shop I love and hopefully do some foraging.