Two clarifications: 1) I didn’t really “cook” this exactly and 2) I get a good amount of random comments correcting me when I make internationally loved items and put the WCIC prefix on them.  I get that jellyfish, stomach tacos, and tuna head aren’t “weird crap” in some places, but if Kristi won’t stand in the same kitchen as an ingredient, it qualifies as weird for the purposes of this ‘lil blog.

Two weeks ago I finally made the trip to Super 88 market in Brighton with Janet and occasional blog character and game meat provider, Dupee.  I don’t have a great reason for why I’ve never been before, aside from I haven’t lived in Brighton for 6 years and my culinary fever was caught after moving away.  For those not familiar, Super 88 is a large pan-Asian supermarket with lots of hard to find ingredients and some very interesting cuts of meat.  After discovering recently that they also have a food court with an assortment of great food, I decided to make the trip. 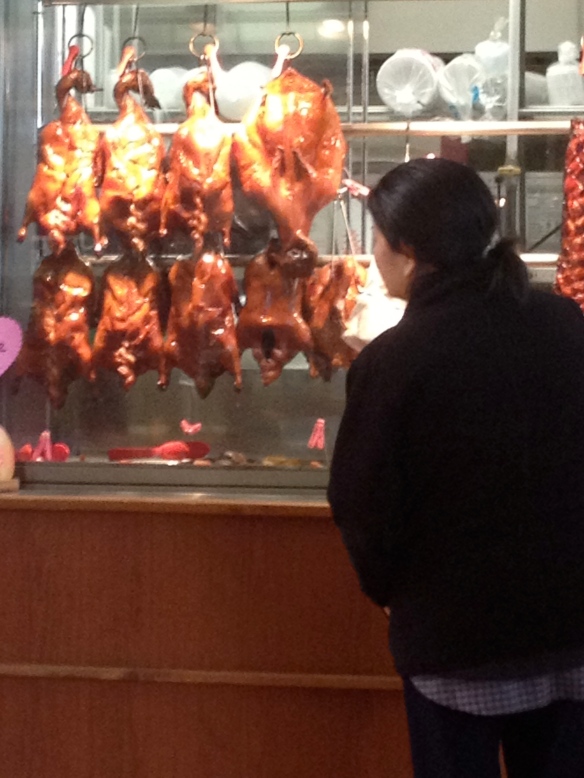 Seeing this totally reassured me that this food court was legit.  I’m used to seeing that hanging in a store window in Chinatown, not in the middle of a Bridgewater mall-like food court

The first major error of the day was assuming that the food court opened at the same time as the grocery store (9 AM).  It actually opened two hours later, and we unfortunately arrived at 9:30.  I did my best to kill time poking meats in the market and letting Janet push her stroller around, but even I couldn’t kill an hour and a half this way.  So, after collecting as many interesting items as I could justify, Dupee, Janet and I headed out to explore Brighton ave.

The area between Harvard ave and Packards corner has evolved into an ethnic restaurant melting pot over the past 10 years and I was amazed at how good everything looked.  After an hour in which Janet sampled baklava, Vietnamese scallion pastry, wind burn, and frostbite, the doors to the food court opened and we headed in.  I immediately ordered a quarter roast duck.

Traditional roast duck isn’t for everyone since it’s mostly skin and fat with lots of bones to navigate around.  Oh,  and it’s served lukewarm. Regardless, I was incredibly excited when my order came up until Janet got all up in my face and started stealing my food.

This kid won’t touch vegetables or bland pasta, yet she goes nuts for scrapple, lox, baklava, roast duck, and short ribs.  Wait a tick.  I WON!!!  IN YOUR FACE KRISTI!!!  She eats like her daddy!!!!

The roast duck was awesome, if a little tough to feed to a 1.75 year old that was constantly demanding a fresh piece.  Lots of little bones since the thigh and leg were cut into chopstick-sized pieces with a cleaver.  The meat was so moist and tasty, though, and the crispy fatty skin was as delicious as it sounds.

The next food item I got was a traditional display of Pete’s stupidity.  I know I don’t like most Chinese cross-cut short rib preparations; the meat never seems to cook long enough to be tender which leaves it chewy and tough to eat.  But, as usual I saw a picture on the menu and ordered them anyway.  Dupee and I were both very disappointed, especially with how hard it was to get the meat off the bones, but Janet enjoyed them.

Janet was extremely jealous of the chopsticks we were using to eat, so she got her own pair and took a shot.  She poked in vain for about 30 seconds and then picked up the meat with her fingers and ate it.  You know, just like everyone else the first time they use chopsticks

All in all the food court was decent and I’d like to try a few of the food stalls I didn’t hit this time around sometime soon.  But, the main goal of the trip was finding a bunch of stuff I hadn’t cooked before and making something at home.

The produce was either extremely fresh (the seafood and vegetables) or slightly dodgy looking (the meat).  For example, I could have had the seafood counter clean one of the live Tilapia or Carp for me (“Kristi! Got us some carp for dinner!  You know, carp!”) and yet the bulk of the meat was frozen solid.  I still came away with a decent haul for under $20. 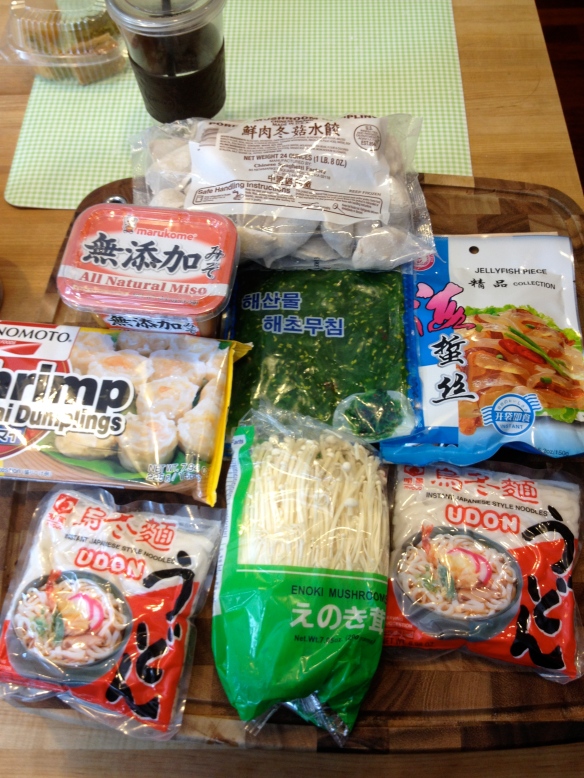 Those dumplings and shumai were gone within 5 days, the enoki mushrooms and udon made a bawmb noodle dish, and the miso has some high expectations associated with it ever since I heard about miso-glazed pulled pork.  If you read the emotion “giddy elation” from the preceding sentence, you are an incredibly observant reader

The dumplings cost $2 and were enough food for three meals.  The seaweed salad made me realize I’ve been paying twice the cost of this package for a quarter of the seaweed salad from restaurants my entire life.  The Udon will likely be the item I buy in bulk on every future visit since it was easy and cam e out so delicious.  But, the jellyfish, now that stuff was the main event.

Looks like a bag of gummy Jolly Ranchers or something.  Nope, not quite.  Wish I knew what collection those characters represent so that I can see if it was limited edition or something

Purchasing jellyfish to make jellyfish salad was one of my goals for the trip.  The reasons were simple: I love jellyfish salad, haven’t had it in a while, definitely have never made it, and I needed some blog fodder.  When I first scanned the seafood department and produce, I didn’t see any jellyfish and got a little concerned.  Eventually, I noticed that I was surrounded by boxes (next to the open freezers but not exactly refrigerated) filled with packages that looked like the one above.  They were a variety of colors; red, green, yellow, blue, purple, etc. but all otherwise identical and covered with calligraphy and not much English. 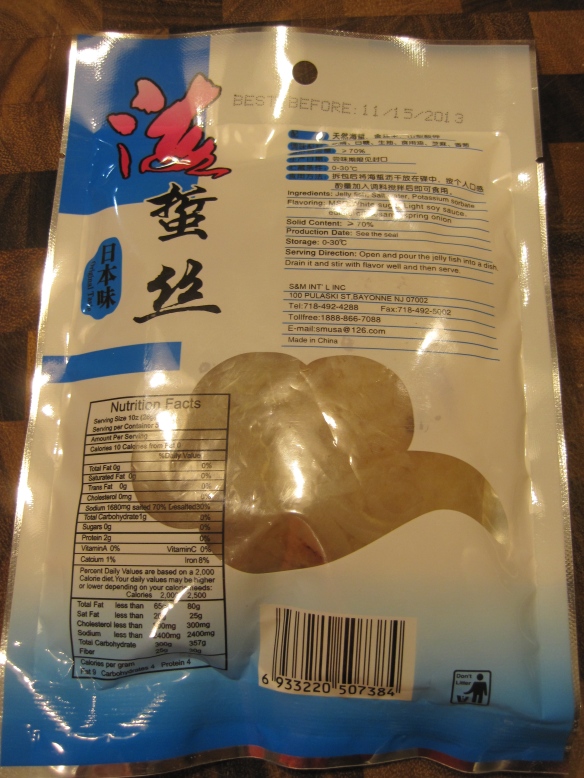 After a few minutes of looking at the different colored packages and trying to figure out the difference, I noticed the small English language ingredients on the back.  I assumed these ingredients were the marinade the jellyfish would be sitting in, and after not finding a “plain” version, I went for the most innocuous combo I could find.  I was hoping that the sesame oil, msg, sugar, vinegar, and soy sauce note on the package would rinse off easily so I could season.  Yet, when I opened the package at home, I found jellyfish and this.

Welp, that was surprising.  After looking at this and the small package of jellyfish for a while, I recognized that this is almost like a (sadly defunct) Handi Snack or the famous Walking Taco.  Tear open the top, dump on your seasonings, then walk around eating your meal.  Of jellyfish!

I was intrigued enough that I tore open each package and tasted the contents.  Actually, after tasting the cheap soy sauce and vinegar, and what tasted like burned fryer oil, I elected against tearing into the packet of white sugar and MSG and safely disposed of it out of Janet’s reach.  Not due to MSG fears (Super 88 covers its walls with pro-MSG/anti-MSG fear info, which I enjoyed reading), but because I was kind of grossed out by the tastes in those packets.  Back to the jellyfish. 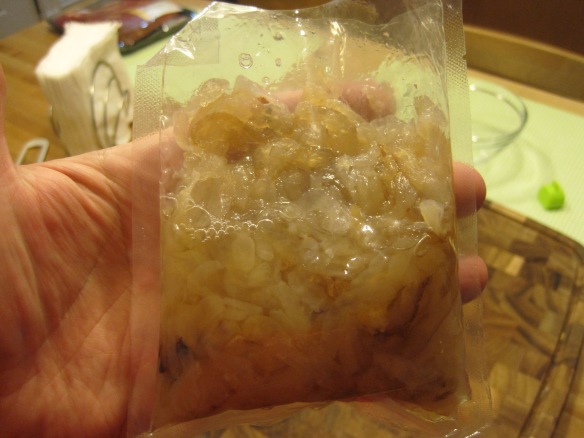 Wouldn’t have been the most appealing package of “food” to be presented with, but now that you know it was approved to sit in lukewarm temperatures for up to one year, you gotta be a convert, right?!?!?!

There was nothing fishy about the smell or any unpleasant odors at all.  It really just looked like an odd-looking bag of noodles.  Regardless, I threw the jellyfish pieces into a colander for a good rinsing in cold water.

I had a love/hate relationship with the darker spotted pieces of jellyfish.  The love was that they made it clear it wasn’t just a pile of cellophane or rubber bands, the hate was that they looked a little nasty

After shaking and draining off all excess water, it looked slightly nicer.

Like noodles kinda.  I wish I could make this seem normal and not like the thing that stung me on a Long Island beach when I was 8 and made me terrified of jellyfish as a kid.  Vengeance is mine, jellyfish

I seasoned the jellyfish with pretty much the same seasonings that I had just thrown away.  These ones tasted better and were less sketchy though.  Crushed red pepper, rice wine vinegar, tamari, toasted sesame oil, a pinch of grated ginger, and a little brown sugar were all tossed with the jellyfish in a glass bowl.  Then into the fridge for about an hour to let the flavors come together.  Which left me with this.

Pretty humble little pile, but I can’t complain since I think the package cost $1.50. I have no idea what anything costs at Super 88 but my first guess for anything would be $1.50

I’d already eaten dinner at this point, but I wasn’t too concerned about the small portion of jellyfish salad overly filling me up.  I was just excited to have it again since I may have last consumed jellyfish salad two years ago in Philly.

Will someone show Janet this picture so she understand how chopsticks work?  That kid needs to stop embarrassing me with her lack of dexterity.  It’s kind of BS

Not sure that I even need to write this part, but I finished the whole bowl and it was delicious.  Jellyfish salad is most similar to seaweed salad; it’s not gelatinous, slimy or mushy, it’s actually crunchy and most similar in texture to grilled octopus or calamari.  Your teeth go through easily, but there is still some crunch despite it being so soft.  There isn’t much flavor to the actual jellyfish, it’s mostly just a texture pairing with the seasonings you add. Combined with the sesame/soy/pepper/vinegar combo, it is always going to be a winner for me.

Off to Naples for the weekend which is always good for a post.