This post marks the one year anniversary of the ADB blog.  I didn’t quite accomplish all of my goals for the blog, primarily that I only averaged three posts a month, but I’ve enjoyed the experience and hope to keep it up for years to come.  Just as long as this little lady doesn’t oppose:

Introducing a new character to the blog, our daughter Janet. She baked at 99 degrees for 38 weeks. Also, this is the first time that the Le Creuset has been my second favorite thing in a picture

To celebrate the one year anniversary of the blog, I wanted to bring it full circle to where this blog began: cooking a whole hogs head.  Unfortunately, the folks at Meatland who sold me the original head told me that they wouldn’t have any in until the fall.  So, instead, I decided to make the dish I was planning on (head cheese) with the opposite end of the animal: the feet and ankles.

Total price for 5.6 lbs of pork: $6.55. I learned later in the process why this wasn't the bargain of the century

If someone has heard of head cheese before, they usually picture the bizarre “meat chunks in clear jello” item from the deli case.  In reality, head cheese is showing up on more and more menus at nice restaurants (likely because it is cheap to make) under it’s more fashionable name of “pork terrine”.  Terrines can be anything layered, really, but whenever I see a pork terrine I know that it’s just fancy head cheese; cooked and chopped pieces of meat that are held together by a gelatin made from boiling bones.

After a little online research I learned that pretty much any part of pig will work for making head cheese, which brings us back to that smorgasbord of funky meats. 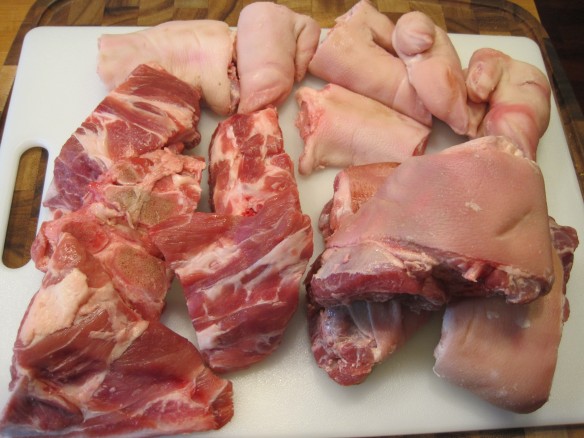 The top is halved pig’s feet, bottom right is the hocks (or ankle joints), and bottom left is the neck bones.  The neck bones were a last second purchase since the other two ingredients looked a little light on meat.

The feet were unpleasant to handle and look at. Really happy I didn't end up sampling that bag of trotters in Korea. He might never forgive me for saying this, but that little piece at the top looks kind of similar to Conor's thumb from the "Hearts & Bones" post.

It’s a pretty simple dish to make: boil until the meat is falling off the bone, remove the meat and chop coarsely, mix with the cooking liquid, and let set in the fridge.  It can taste really good too, since it’s just tender pork and seasonings, but the texture tends to put people off since a single bite can have a few different textures.

I started out by rubbing a little salt and Chinese five spice into the meat then wrapped up a few cloves and peppercorns into some cheesecloth to boil with the pork.

I went with the cloves and five spice because I wanted to add flavors that contrasted with the pork instead of amplified it the way sage or thyme would.  And… that’s it for prep.  At this point it all went into a pot with a bay leaf, a halved onion and water until the meat was completely covered.

"Wow! That looks delicious!" - Nobody

The lid went on, I brought it up to a boil and then reduced the heat to simmer for 3+ hours.  The sign I was looking for was the meat separating from bone.

I removed all of the pork from the pot and strained out the onion, bay leaf, and spice package.  After letting the reserved liquid settle and skimming off some fat, I returned the broth to the stovetop to reduce a bit.

Due to all of the skin, and the grey color of boiled meat, the pork still didn’t look very pleasant.  But there was tender meat hiding on each unfortunate looking piece.

The previous statement actually isn't true; the feet, since they were primarily just the toes, had nothing on them but gelatinous tendon and fat. Also, my fingers had to be washed every minute or so because the gelatin made them too sticky to use

There’s really no need for more pictures like that, and Kristi refused to take action shots, so I will describe instead of show what I discovered.

After peeling off the skin and fat, each hock had some very large chunks of meat, similar to what you would expect on a lamb shank.  The neck bones had meat that looked like pork shoulder, but were more of a pain to handle due to tiny bones and small, although plentiful, pieces of meat.  I may have found an average of one morsel of edible material on each foot.  All that picking left me with this:

A little less than a pound of tender pork...

...compared to about 4 pounds of bone, fat, and skin. As I said, the cheap per-pound pricing didn't necessarily make it a great deal

I sorted through the meat a few times to make sure there weren’t any pieces of bone, fat, or cartilage that would make for an unpleasant bite, then chopped up the larger chunks.  From there I seasoned with lots of salt and pepper, about a teaspoon of cayenne, and a little onion powder.

In the interest of cutting the richness, I added a good pour of apple cider vinegar to the meat, probably about 3 tablespoons, then a ladle of the reduced cooking liquid. 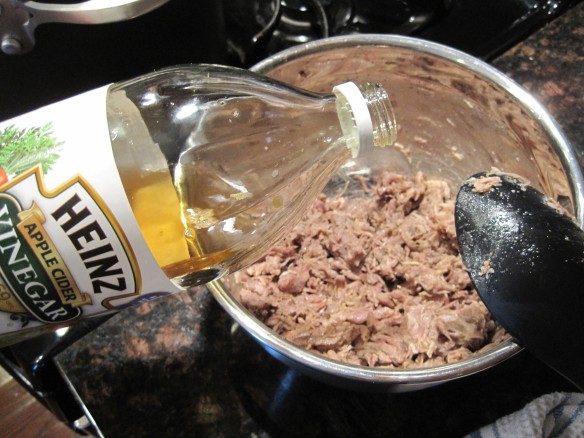 Not sure why I like the pour shots, but they have become a consistent theme on this blog

Stirred that well and dumped the entire bowl into an 8″ loaf pan.  Once it settled, I poured a half ladle more of the cooking liquid over the top and it was ready to be covered and head into the fridge to set.

About how I expected it to look, the extra ladle of liquid disappeared into the meat

After a few hours spent at dinner (Stella, one of our favorite restaurants in Boston) and a championship high school lacrosse game (St. Johns Prep vs. Duxbury) we headed back to check on the head cheese. 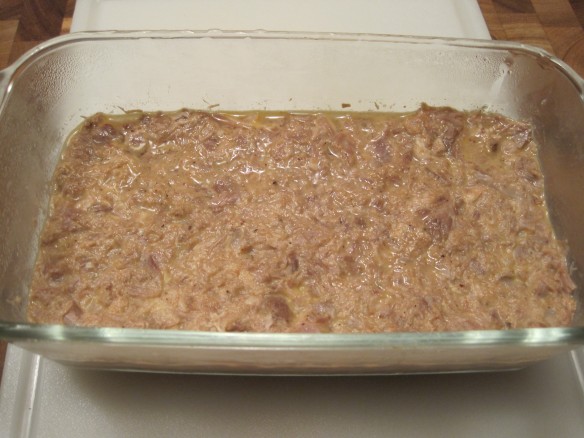 Looks about the same... 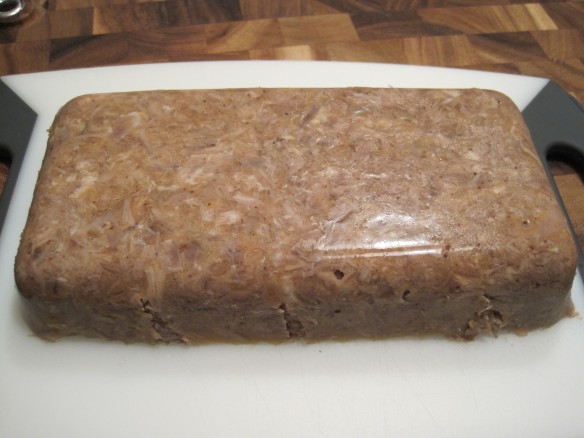 ...but not when you turn it upside down and pop it out of the loaf pan

From there, you slice off a piece at a time.

Every slice is a little different, but the flavor and mix of textures is pretty consistent

This one was a little closer to the restaurant variety since the meat was relatively dense despite all of the liquid that was added.  To make something closer to the deli case version, you’d add more of the cooking liquid so that the meat would be floating in gelatin.

The first bite was a little tough for me, which isn’t a new thing for the meals on this blog.  Sometimes you can’t get the image or smells of the raw ingredients out of your head.  Happened with the chicken slaughter, happened with the pig’s stomach, and now them pig’s toes were really getting to me.  As with the others, one bite was all I needed to forget all that and start enjoying it.

The terrine had a clean pork flavor that was most similar to cold pulled pork shoulder, but with less of a fatty taste.  You could taste hints of the cloves, black pepper, and apple cider vinegar that helped cut the richness a bit.  Best served with some pickles, dijon or spicy brown mustard, and, for Conor and I, a little bourbon.

I alternated between terrine on toast with dijon mustard and terrine with a mini dill pickle on top. Also, Jefferson's bourbon was a new one for me, but a good one

All in all, I think it was pretty tasty and I’ve heard concurring views from Conor, Tim, and Mommy Ryan.  If I did it again, which I might if I am in charge of a cheese or charcuterie plate (you’ve been warned), I would use only the hocks and a much smaller loaf-style pan as a mold.  Spices would stay the same, though I’d add a little more salt.

Not sure what is up next.  Would like to do some sort of seafood since it’s the summer, but will need to think of something interesting.  Feel free to email suggestions.