Two weekends ago marked the arrival of a new member of the Ryan family; our new gas grill.  The grill is very similar to a child really; the whole process started with an extended painful labor (the assembly), it was unconditionally loved from birth, and we’ve played with it nonstop since.  Most nights Kristi and I have both checked on it before we’ve headed to bed.  Oh, and Janet turned one.

Anyhoo, with the new grill on the front deck, it seemed like it was time for another round of Pete’s Burgers.  I’ve always enjoyed when a restaurant burger has the added bonus of a fried egg on top, so I figured I would do my own version of that and make it as breakfast-like as I could.  As usual, any good burger starts with good ground beef.

I love me some Costco, and their organic 85/15 ground beef never disappoints

To continue on the path of things that should be done every time you make any kind of burger, I mixed the ground beef with lots of salt and pepper. 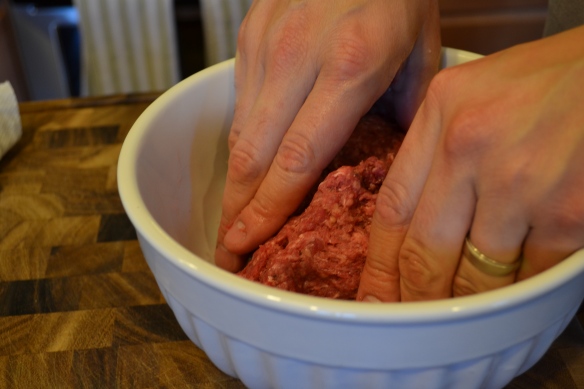 I need to take my wedding ring off before I do stuff like this.  It acts like a to-go container with the amount of crap it collects in situations like this

When thinking about how to use the egg, I’d heard of people doing some sort of birds nest burger where the burger is a ring, with an egg cracked in the center, cooked in a pan.  Boooring.  Who cooks burgers in a pan anyway?  To cook it on the grill I needed to break out a little razzle dazzle.

While Kristi fried some bacon (what else would go on a breakfast burger?) I broke the meat into four equal portions then divided two portions into four large thin patties that I flattened on wax paper.

Normal burgers on the right, two of the four large extra thin patties on the left.  In other news, I’ve discovered the subpar pictures coming out of the nice camera lately must be user error, because look at the quality of every picture Kristi took for this post.  Also, lotsa stuff going on behind this shot

Now for the egg.  Whites are boring, they are for binding or bland omelettes; you really only want the flavor of the yolk.  The key for this one is to match the quality of your beef with your egg yolk.  I recommend the Pete & Gerry’s Heirloom Americauna and Maran eggs because the yolk is huge and flavorful.  I separated out the whites and dropped a yolk in the center of two of the large thin patties.

Heirloom yolk on the left, standard Pete & Gerry’s (which is still 10x better than a sweatshop grocery store egg) on the right. The Americauna yolks are dark orange in person and taste the way an egg yolk should

With the yolks in the center of the bottom halves, I laid the top half of the burger meat over the top of the yolk and carefully pinched the sides while letting out any excess air.  I think if I had screwed up this step I would have acted like Janet when she wants out of the booster and started crying while dropping ground beef out of both hands with my arms above my head.  Luckily everything went smoothly.

A roll of wax paper will take several years to go through in our condo, but it is completely crucial every time it is used

With the burgers all sealed up, I shaped them a bit to resemble regular burgers, then got started on my key condiment.

I ended up going with a maple aioli consisting of half Vermont maple syrup, half mayo, plus some ground pepper and dried herbs. 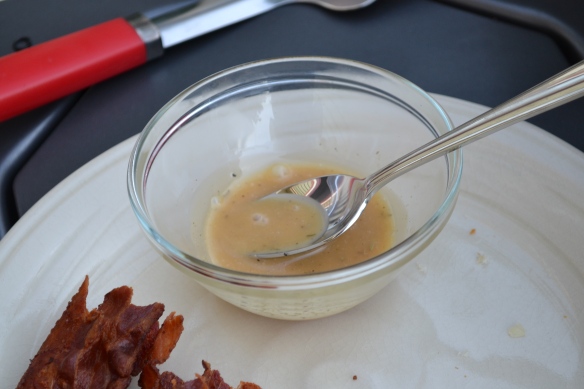 I used to lose my sh*t when syrup got on my bacon, eggs, or sausage since I’ve only recently started to like the salty/sweet contrast.  Still not a huge fan of straight syrup on my breakfast meats, but I knew a toned down version would be awse

With the toppings and burgers all prepped, it was time do fire up the King Griller!

This lid says “King Griller” but its real name is way cooler: The Stealth Griller.  Nice heavy lid and gets up to 600 degrees in about 5 minutes.  Shameless plug: you can get ’em with free shipping to your door at Wayfair.com for around $200.  Second thinly veiled product placement of the post!

Let’s address those buns for a second.  In principle, I like brioche, but I also have complained about its overuse in restaurants due to how much larger it is than any reasonably sized burger.  I prefer perfectly sized Martin’s Potato Rolls.  But, Kristi was doing the shopping this day and I have to say it ended up being the perfect bun as you’ll see later.

Once the grill was good and hot, the burgers went on with the lid down and the heat set to medium/high for about five minutes before flipping.

Yeah, Kristi is definitely a better photographer than me.  Eventually the only things I am going to be better at than her are cooking organ meats and eating, which most people will react to by shrugging and saying, “sounds about right”

Since I was using a nice sharp Cabot cheddar (3rd placement!), I put the cheese on immediately after flipping and put the buns on the top rack before closing the lid again.  After a couple minutes I took the buns off and slathered a good amount of the maple aioli on the top and bottom before pulling the burgers off the grill. 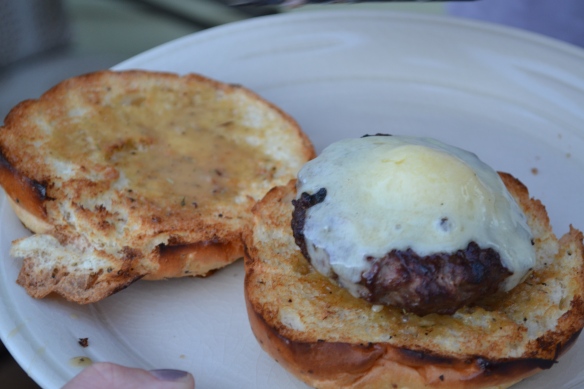 Figured this would help show how much of the aioli I put on each side, but I am also just really in to how good these pictures came out. I promise the reason all that extra bun worked out will make sense eventually 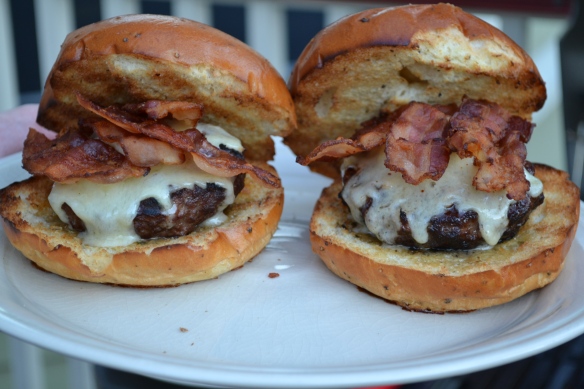 I wrote half of this post while in the painful throes of some sketchy burrito-induced food poisoning and this picture was still able to make me hungry.  I defended you for years Boca Grande, but no mo’.  Fooled me twice, shame on me

As Uncle Jesse would say, “Haave mer-cy”.  Forget the TV quotes, lets go with, “Jeepers creepers!”  Actually, I mean, Good Golly Miss Molly!  They haven’t invented an exclamation in the past 20 years that can encapsulate how awesome this was.  This burger was really the cat’s pajamas

Serve with a pile of goddess-dressed beats & greens and a Brooklyn Summer Ale (4th!) and you have one hell of an amazing dinner.  I can’t look at these fotos without salivating

In order to make sure the yolk wasn’t completely cold, I cooked the burger to a medium/medium well temperature.  The temperature didn’t really matter, though, since they were plenty moist from all of the rich egg yolk and melty cheddar.

The burger meat reminded both of us of sausage from all of the salt and pepper and because it was complimented by so many other breakfast flavors.  The cheddar and bacon were obviously awesome, but the maple aioli really brought it all together with that distinct maple sweetness complimenting without overwhelming the other flavors.  Of course, the divine purpose of the large brioche all along was sopping up that delicious yolk that went everywhere when we cut into the burgers.

The photos in this one might be tough to top, but I’ve got some ideas for next week.

Finally, to give a proper shout out to my (slightly older than a) baby girl, happy first birthday Janet!  You’ve made this past year more fun than your mother and I could have ever imagined.

Alright, fine.  Maybe the burger pics can be topped