When I was first starting to cook a lot after moving to JP five years ago, one of the items I tried to get good at was potstickers.  My go-to filling was a mixture of baby bok choy, chicken, and peanuts which I thought I had down pretty well.  Then Tim comes for a visit, challenges me to a “potsticker-off”, and all of a sudden the pressure is on.

According to Kristi (the judge), Tim’s pork and frozen vegetable potstickers beat mine handily.  I know, I know, I’m also amazed that I decided to go through with proposing to her after that decision.  Anyway, with that judgment, my interest in making potstickers was erased and I took a multiple year hiatus from cooking them.

That all changed when boredom struck in Michigan and I decided to thaw out and shell a pound of small raw shrimp.  I remembered from my chicken and bok choy potstickers that whole pieces of meat were less enjoyable so I threw the shrimp into a Cuisinart to grind. 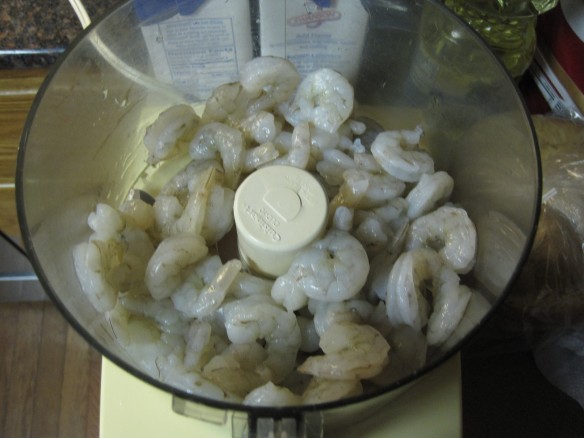 I think we all already know this post isn't going to be m'best, but lets just go through the motions and see if we can maybe surprise ourselves here

I ran the processor for a bit to make sure the shrimp were well chopped, seasoned with a little salt and pepper, and made a four potsticker test batch.  Ground shrimp stands on its own pretty well, but I decided to add in a little chopped green onion, crushed red pepper, garlic, and ginger when I found the flavor to be a little lacking. 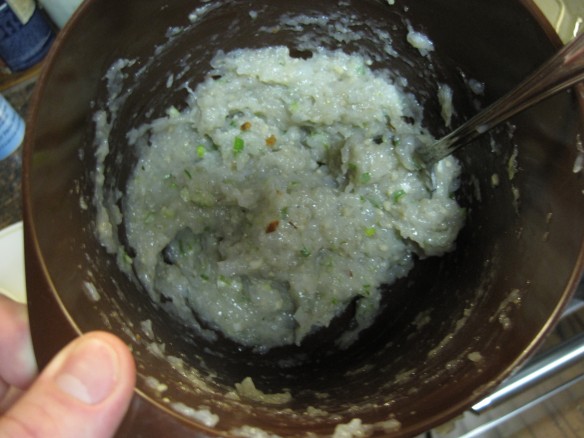 When something looks unappetizing, just throw it in a brown bowl and everything is better. Damn, there is just nothing funny about this picture

Making the potstickers is pretty easy; buy wonton wrappers, put a spoonful of contents in them, then fold over and seal with a little water.  The only thing that can get a little tedious is finding the right amount of contents for each wrapper.  Too little and it just tastes like wonton wrapper; too much and it will be spilling out over the edges when you try to seal it, something I was pretty sick of already from putting on my jeans everyday.

Fat joke... good start Pete! Let's get some momentum going here and see if we can't turn this thing around!

A pound of shrimp makes about 25 potstickers, and it’s easiest to make them all at the same time and then cook in smaller batches.

There are three ways to fold (according to me, so based on no real knowledge): triangle, all corners folded in, or the odd pinched half circles Tim used to make.  Friggin’ jerk.  I went with the triangles since they’re easy and hold up for two bites.

A couple go-to jokes in that paragraph. Oldies but goodies I say. This thing is really taking shape, buckle your seat belts!

I actually think the most important thing about potstickers is the sauce.  You really can’t go wrong with a base of soy sauce, toasted sesame oil, and a little rice wine vinegar mixed with red pepper, minced garlic, grated ginger, and thin sliced green onion for color.

Once the sauce is made, heat up a little oil in a large frying pan over medium heat and put the raw potstickers in, covering immediately.  After a few minutes, or once they’ve browned, flip and brown the other side with the cover off.  Remove from the pan, let any excess oil drain off on paper towels, and transfer to a serving dish.

The start to that sauce paragraph? That's a literary technique I've learned from the world's greatest writers: shitty food bloggers. Make a statement like you're imagining the reader responding, "No WAY! The sauce is the least important part!!! What a crazy hack!!!" when it's a non-controversial statement. This post just went off the rails

The potstickers were pretty delicious.  It’s hard to screw up ground shrimp, but nonetheless it occasionally ends up overcooked and rubbery in some of the lesser pan-Asian restaurants I’ve visited.  The filling was tender and the shrimp was nicely complimented by the scallion, garlic and ginger.  The sauce provided any saltiness missing from the filling and in addition to the delicious sesame flavor there was some good bite from the vinegar and red pepper.  Dece.

With universally solid reviews (from a universe of 4) I was high on potstickers again and officially had wonton fever.  Conor has started a fun (and unhealthy) mini-tradition in JP by covertly ordering crab rangoons for delivery any time we are hanging out late night.  With plans to host a New Years Eve party, I figured it was time to take a crack at making the late night ‘goons myself.  I started out with imitation crab, sauteed onions, cream cheese, salt and pepper in the processor. 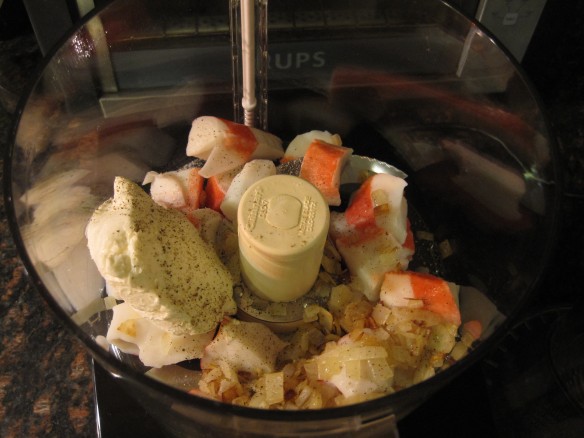 I'm sure you could make these with just cream cheese and it would be about as good. I feel like I should start telling stories from high school or something in these captions. I got nothing

It’s fair to point out that I was making these at 11PM on New Years Eve after a day of hanging out in Southie, so the pictures won’t exactly be high quality.  Anyhoo, after a lot of pulsing, pressing down on the sides and more blending, I ended up with this for the filling.

Imitation crab is one of nature's superfoods, or so I like to believe and thus avoid the list of ingredients specifically not to ruin the illusion. There you go! That's kind of a caption joke of sorts

The filling and sealing process was the same for rangoons as it was for the potstickers, and of course I made a similar sauce since it goes with pretty much anything.

Annnnnd, right as I was about halfway through sealing the wontons, Conor comes back from the front door with a huge box of rangoons.  That’s right, we got a new blog villain folks!  Friggin jerk orders takeout to blow my ‘goons out of the water.  I pressed on with my plan while taking bites of the local Chinese restaurant’s take on crab rangoon and cursing my friend.

Not quite the bubbly crunchy deep fried version, but it still made our apartment smell like crap! Really rounding into form here

Eventually I plated a wonderful platter of food shortly after my friends finished stuffing their faces from a styrofoam container.

I was happy to beat up those other rangoons and steal their sauce. Friggin bully 'goons had it coming. Dammit, way too late

The rangoons may have been even better than the shrimp potstickers.  Much less cream cheese than the standard Chinese takeout variety, and that combination of flavors is so delicious.  It’s tough to give an accurate and objective take on the flavor and deliciousness  because they came out at midnight on New Years eve, but they sure went quick and tasted good.  I’d happily make them again at a time of year that it is easier to air out the condo.

I’ll do better next week, I need to know not to try and write these things when I’m tired.