Sorry for no post these past two weeks.  Holiday craziness.  Will be back early next week with some Wontons & Dumplings or Canadian food or goat head (all in the queue).

I leave you with Tim’s Michigan breakfast of toasted English muffin, pork shoulder bacon from a local butcher shop (need to find this near me), and Velveeta.

A plus sized breakfast….

…for some plus sized dudes.  Yeah, we’re both on post-holidays diets right now.

A few weeks ago I decided to give vegetarianism (is that a word?) a shot for a week.  At my old job, I had a friend who gave up fried food and sweets every year for lent.  I used to give her a lot of crap about how she essentially just chose to go on a diet every year for lent but she claimed that it never resulted in weight loss.  This was along those same lines; I was feeling disgusting after the holidays and wanted to see if removing meat from my diet would have a good effect on my gut.  It didn’t, but at least now I know that.

Anyway, the goal was to be a vegetarian for a week followed by a week of being a vegan.  I only made it a couple days into the vegan diet since I was poorly prepared and didn’t do enough research in advance.  For the vegetarian week, I still ate products that included dairy and eggs, which I think is referred to as a “lacto-ovo vegetarian” but not by anybody I would want to hang out with.  For the vegan days, all animal products were off limits.

Before I start with the meals I ate, a big thank you to Taylor who was a huge help in the process.  Taylor’s been a vegetarian for a long time and she patiently responded to the 20+ texts I sent her with questions including, “so, explain what animal vegetables come from?” and “I can’t eat chicken?!?!? Seriously?!?!?”.

For the most part, the first week consisted of pretty boring breakfasts and lunches like eggs, yogurt, salads, and protein shakes.  Snacks included a lot of hummus, carrots, pretzels, and this: 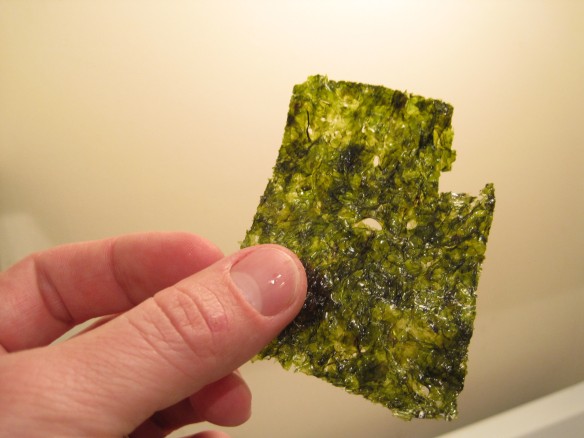 I love seaweed in nori form.  I first had it at Clark Sheppard’s house when I was very young since his mom had spent some time in Japan.  I love the crunchy and chewy texture and how salty they are.  Really tough to fill up on, since there’s basically nothing to them.

For dinner, I tried to be a little bit more creative and will share some of those food items.  In order to get protein in my dinners, I had to find a way to make tofu enjoyable.  Generally, I don’t like tofu because of the mushy texture so I gave baking it a shot.

I tried very hard to convince myself that it would be just like scrapple. Didn't work

I briefly marinated these in hot sauce, soy sauce, garlic and pepper before baking for a half hour.  The baking gave the pieces a crispy skin and a chewy texture.  Once I cut them up they added some protein and meaty flavor to the hummus and vegetable wraps I was planning to eat for dinner.

You can see a little of the chopped tofu and hummus poking out at the left end of the wrap. Also, they are wraps, not tacos

The mushroom, onion, and red bell pepper were cooked with cumin, lime, salt and pepper.  I had a little Mediterranean, a little Asian, and little TexMex flavor all on one wrap.  I enjoyed it, not sure anyone else would.

The next day I visited one of the most popular food carts near the UPenn campus in Philadelphia: Magic Carpet Foods. 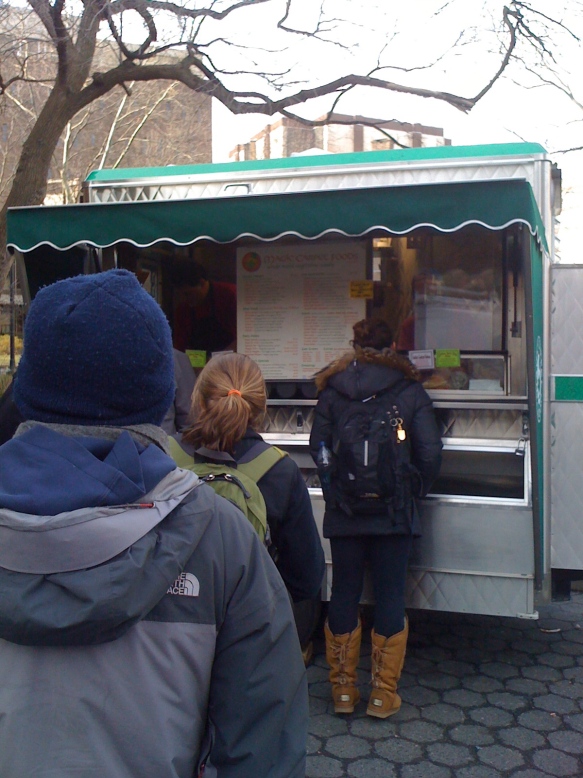 The lines get absurdly long. I had already waited in this one for ten minutes or so before I realized I should take a picture

Everything that Magic Carpet serves is vegetarian and they are pretty creative.  There are the standards like falaffel, hummus, baba gannouj, etc., but what they do with seitan is really incredible.  Seitan is referred to as “wheat meat” and will be the subject of a future blog post, mainly because it can closely approximate the texture and flavors of meat when cooked right.

Magic Carpet uses seitan in a variety of dishes, but their best one by far is the “magic meatballs”.  Basically, its all the ingredients of a normal meatball with the meat replaced by ground seitan, then simmered in marinara sauce.  My go-to is their combo salad with baba and magic meatballs, which is basically just a pile of salad mix with those items thrown on top and a lid smushed on.

I know it may not look that good, but you should know it endured a thirty minute walk home sideways because I was holding it wrong

Seriously delicious food made and served by a few hippies.  Worth waiting in line for if you are ever in town.

Speaking of seitan, one meal I attempted at home was a seitan “cheesesteak”.  The “wheat meat” was sliced up and thrown in a hot pan with onions and mushrooms to get it a little browned on the outside.  Completely unrelated note: I didn’t expect to need so many quotation marks in a post about vegetarian stuff.

I ended up making this an additional time, and it came out even better. Glad to notice that this picture makes me hungry

Once it had cooked for a bit I piled it up on a roll and put some grated gruyere and swiss on top before melting in the toaster oven.

Kristi got the wrong rolls. There, I said it. I asked her to get cheesesteak rolls and she came back with these round ones. Lets pretend its to visually differentiate between a vegetarian cheesesteak and a normal one

The first batch came out decently, with the seitan pieces a little too large, and the cheese not having the richness I was hoping for.  Round 2, which I consumed for football Sunday lunch, was a dece approximation of a cheesesteak and not a bad substitute for a guy with the NFL Playoffs-non-meat-eating blues.

With the start of a new week came a shot at being a vegan.  I was incredibly unprepared.  Cheerios and iced coffee with soy milk was a great start to the day, but most of the vegetarian places by campus weren’t vegan-safe and a green salad really isn’t filling.  By the time I made it to dinner the first two nights, I was starving.

First night was seitan and vegetable stir fry served over brown rice.  The key was cooking the brown rice with some vegetable stock and chopped red onions to reduce the overall blandness of the rice.

Yep, thats an individual serving size of brown minute-rice. I'm not ashamed. OK, I am a little ashamed.

The seitan, mushroom, and orange pepper stir fry was seasoned with cumin and cayenne. 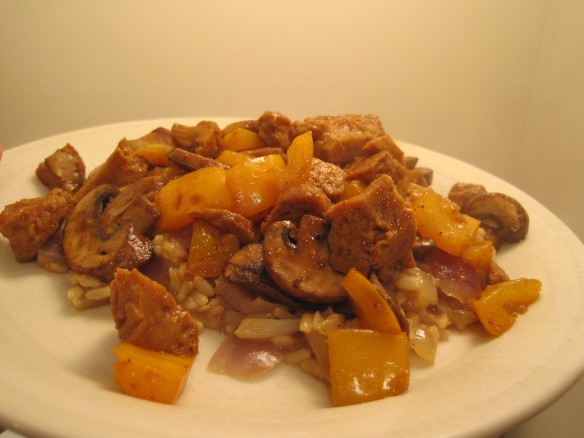 Decent textures and spiciness in this one

Overall a very fulfilling meal, but I think I had to eat a lot of it to fill up.

The next day in class, while eating raw almonds and pretending that they tasted good and made me less hungry, I realized that risotto could be easily made without dairy and egg.  The great thing is that the creaminess from the rice starch would replace the need for cheese.  I hoped.

Into a pot went chopped brown mushrooms, red onion, and garlic to sautee in olive oil before adding the arborio rice, toasting it for a bit, and starting with the veggie stock.

I knew I was in for 40 minutes of stirring, but I really don't mind that part of the risotto process

A few cups of stock later and I had this delicious place of food.

I love risotto and wish I made it more, but I think the buttons of my pants are happy that I don't

I didn’t miss the dairy at all in this one, the only meal I could say that about during my brief time as a vegan.

Annnnnnd after a long day the following day, I met Kristi at the dive behind our apartment for some buffalo wings.  I think I could do a week as a vegan and will likely take another shot at it soon, but I didn’t do nearly enough research on vegan safe brands and lunch ideas.

The biggest bummer for me was that I thought both challenges would force me to be more creative but, instead, it made me less creative.  With vegetarian I overly leaned on dairy and egg products to make the meals more satisfying and with vegan, I basically just ate pasta and rice.  The biggest bummer for you should be this lame post that I thought would be more interesting but likely isn’t.

Future Pete’s Week ideas include gluten free and probiotic.  I don’t think I will be trying raw foods anytime soon, but maybe.   A meat-free version of Weird Crap I Cook is up next week.