First, some pictures I forgot to add to the previous post.

The pork for the cassoulet spent Friday night well salted and peppered to draw any excess liquid out.  True to the overall idea of “stuff lying around in a French farmhouse”, the pork cuts weren’t of the luxurious variety: hocks and meat from the backbone.

Ham hocks.  “Hocks” is such an unpleasant term for pig ankles.  Actually, let’s stick with hocks

Country style ribs.  Anything labeled as “country style” at the supermarket means you are getting leftovers.  Their were bones sticking out of these pieces in all directions, not sure how there is any relation to “ribs” going on here

Now, I was really going to bed.  This time for realsies guys.

These headers are starting to feel like The Shining or something.

First step of the day was straining off the duck stock and reserving the liquid.  It got gooood and gelatinous overnight.

I try to strain my broth through cheese cloth every time and always end up screwing it up and burning my hands on the hot soaking cloth.  So it ends up being foggy, partially strained broth.  Every time.  My financial planner shakes his head at my annual cheesecloth budget

After draining the liquid from the (doubled in size) fully soaked beans and moving them to the fridge, the next step was getting the salt pork ready for the stew.  First up was separating the 3/4lb slab of into its component parts: fat, skin, and meat. 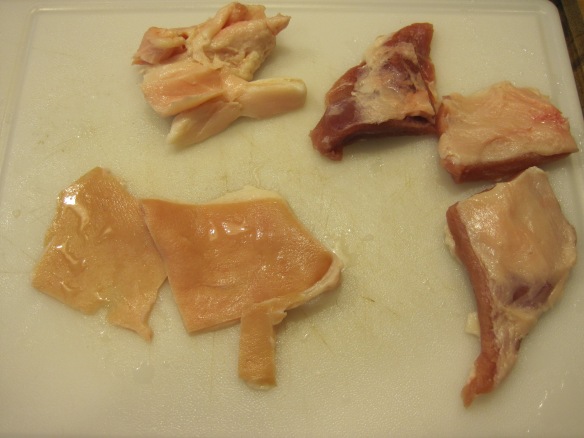 Took Momere’s advice and sought out the meatiest slab of salt pork I could find.  When in doubt, always trust the centenarian who actually used to haggle with people in the process of taking apart an animal.  Not sure if I’d be able to get in touch with Ms. Smithfield or Mr. Hormel

The skin and meat had a few different roles in the cassoulet, so half the meat and all of the skin headed into a pan covered with water for a solid 45-60 minute simmer.  The remaining meat went back into the fridge and the fat headed into the freezer.

Next item up was a little off script: ground snowshoe hare.  That’s some sort of wild rabbit according to my research.  Oh, and the label on the bag of it I was given gave some hints too.

Of course this came from Uncle Billy.  He got a couple snowshoe hare last year and ground up the meat with bacon fat and seasoning.  You know the Hyundai Sonata, “Why?” commercial with the little kid bugging his neighbor?  I generally think that is eerily similar to how I ask Billy food questions

Most recipes for a traditional French Toulouse-style sausage consist of pork, pork fat, garlic, allspice, fresh bay leaves, and cognac.  As usual, I freelanced a bit and assumed that French farmhouse life = lots of hunting and eating rabbit.  So, I decided to build off of the rabbit and pork base Bill provided and add in additional ingredients to make it more Toulouse-y.

First step was peeling the garlic and cubing the pork fat trimmings that, along with the salt pork fat, would supplement the fat content of the sausage.  Rabbit meat is very lean so even with the bacon Billy added, it still needed a lot more fat to be closer to the authentic pork sausages used normally.

Stop and Shop Dedham doesn’t exactly have Sam The Butcher working behind the counter.  It doesn’t help that I whisper when I request odd ingredients, but I am positive he was over 90% deaf and considering punching me.  When he told me he didn’t have pork fat and I pointed to the table of pork fat behind him you would have thought I called his wife ugly or something

In order to keep fat from becoming mushy in the grinding process, the pork trimmings joined the salt pork fat in the freezer for about an hour before being prepped.  With the pork near frozen, the fat and garlic went into the meat grinder with the fine grind plate to be added to the ground rabbit meat.

Looked like a mix of meat and fat on the board, but it was mostly just fat.  This is still about half the fat that would go into a similarly sized traditional Toulouse sausage, the recipes I saw were a Pete-like 40% fat

With the garlic and fat fully ground, I lifted the bowl into the mixer area and inserted the paddle mixer into the Kitchenaid.  I added 4-5 finely chopped fresh bay leaves, a couple ounces of bourbon (didn’t have cognac), a half teaspoon of allspice, and some salt and pepper to the bowl and left it to mix for a few minutes.  Once the liquid was well folded in and the ingredients were dispersed, the sausage looked like this. 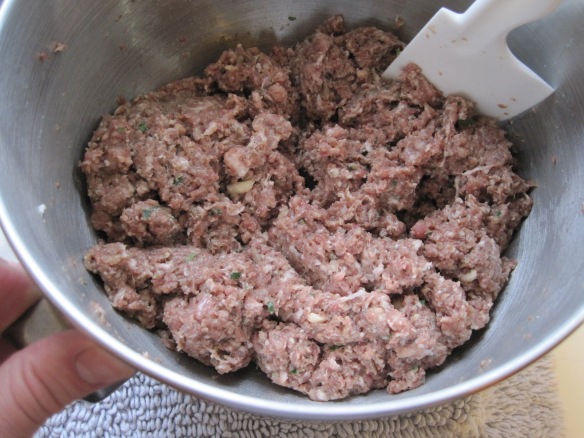 Probably doesn’t look that different to you, but the meat was a lot lighter and way more fragrant with all of the spices.  I read that you should take food fotos with lots of natural light, hence this experimental shot by the window.  I”d give this shot a “meh”

The sausage headed into the fridge to allow the flavors to come together for 24 hours.

It was time to get the main event started in earnest.  Big Yellow hit the stove top with a couple tablespoons of olive oil over medium/high to brown the hocks and the cubes of country-style rib meat.  You’ve seen me brown meat before, so lets cut to the result.

Hocks still not winning you over?  You’ve got some serious willpower, sir or madam.  I’d imagine you’ll need a snack or something though, no one can avoid hunger looking at that plate

With the meat out, a pile of mirepete (refresher: mirepoix + garlic & salty pork) went into big yellow.

Quarter pound of pancetta and some of the diced salt pork rounded out the mirepete.  I really think this whole “mirepete” thing is gonna catch on!  I am pretty sure I overheard someone using the term on The Chew the other day.  How awful is The Chew?  I miss the good old days of Batali being condescending to his guests on Molto Mario

After a few minutes cooking together, I deglazed with a solid pour of white wine and added a couple chopped peeled tomatoes and a whole head of garlic.

I actually did let this cook as shown for a minute or two because I forgot about it, so for once your terror at the unincorporated ingredient shot would be merited

While that simmered for a few minutes, I finished tying up two of the items that would cook and rest with the cassoulet for the next 18 hours but would be easy to find and remove (hopefully): The bouquet garni and pork skin. 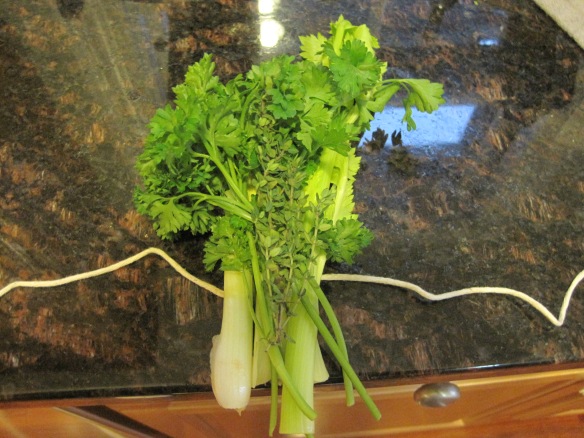 Couple stems of celery, thyme, parsley, and fresh bay leaves.  Looks nicer than anything I normally cook with

Pork skin bundles, much more par for my course.  I struggled with tying up these slippery little emeff’ers and Kristi entered the kitchen as I was about to whip one that kept unravelling across the kitchen.  Luckily, she helped, and we used teamwork to get these done.  Teamwork!

With the bundles all tied up, it was time for everything to head back into the dutch oven.  The browned pork, skin bundles, and bouquet garni went back in with the mirepete and were completely covered with 8 cups of the duck stock. 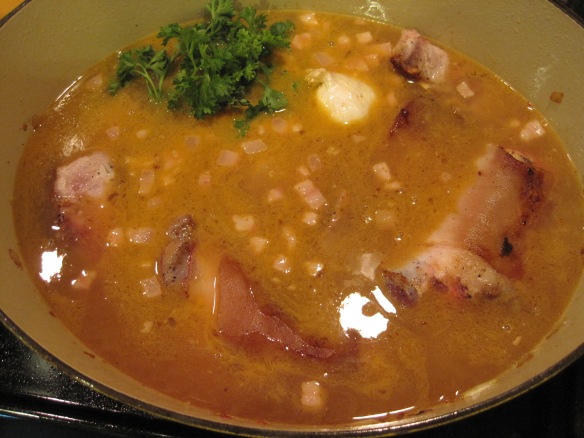 It was good to no longer have to stare at the hocks, they were starting to get to me.   Not because I think they are gross, but the browning process didn’t do great things to their appearance and tightened the skin

I brought the pot to a boil and then turned it down to a simmer for an hour and a half.

After an hour and a quarter, I put the beans into a large pot, covered with water, and set over high heat to par boil.  Par boiling is a controversial topic, it’s like the fracking debate of this blog; I don’t really get it so it makes me uncomfortable, but the experts (Joycie) makes me feel like an *ss for opposing it.  Joycie has made it pretty clear that my lack of a 3 minute par boil on Momere Beans means she would never eat them, she considers it that essential.  So, with all recipes I was referencing recommending a par boil, I decided to break my opposition and boiled them for a few.

Once that dark moment (3 moments to be exact) in my cooking life had passed, I drained the beans and added them to Big Yellow. 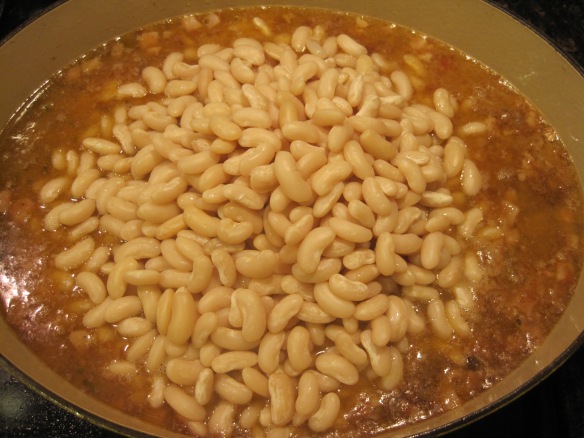 With the beans and meat simmering together for another two hours, it was time to get started on the duck confit.

A quick aside: to confit means to cook slowly in fat, usually goose or duck fat.  Kind of like a low temperature fry or poaching in oil.  The idea is that once the meat has been cured and the salt has flushed out all of the excess liquid, the fat will fill those spaces and leave rich, tender, succulent meat.  And it does work that way.  On the other hand, my gripe is that a one cup container of duck fat from Dartagnan will run you $7-8 and I haven’t been doing much poultry rendering lately.  So I decided to go off the grid and confit in a combination of olive oil and pork fat.

I started by heating equal parts olive oil and lard (about a cup and a half of each).

Yep, gross that this looks tasty to me.  I fully plan to straighten out my eating, go to the gym more regularly, and sleep more starting 1/2/13 and ending some time around 1/6/13

The white lard is from Brother Tim and the darker lard is from Cuttys, which makes me think Cutttys has a little bacon fat blended in with theirs.  Not that it really matters.

With the oil heating to a temperature far below frying but where the fats would melt and blend, I started prepping the overnight cured duck legs for the confit.  First step was a light wiping and rinsing of the excess salt and seasonings from the outside of the thighs. 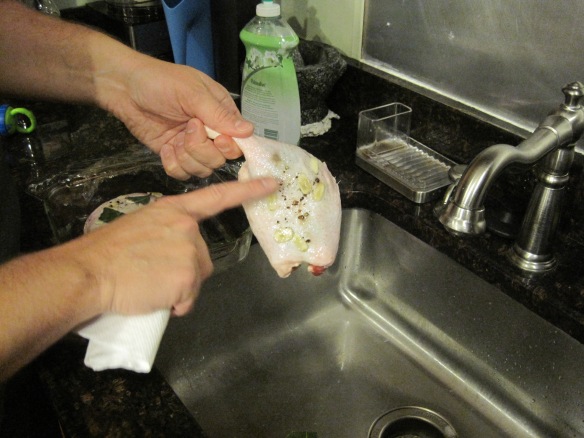 There were seven thighs to confit, so the first layer of four were nestled into the bottom of ‘Lil Blue then covered with about 1/3 of the melted fat.  The remaining three thighs were arranged on top and completely covered with the remaining fat. 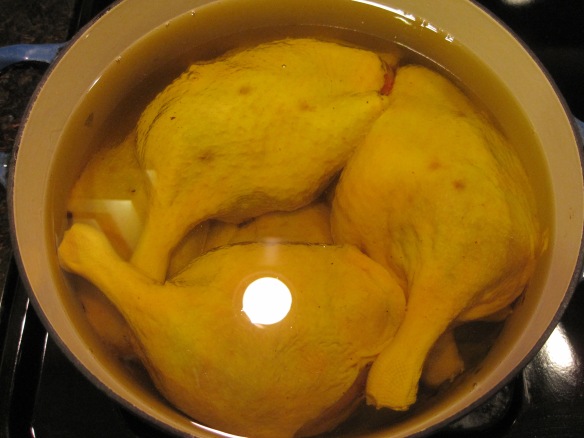 Dats a good fit.  Not sure if I was doing anything right at this point but that’s why I’m lovable!  Right?  Anyone?

It was around 7PM at this point and we had places to be (we are very popular), so the confit headed into a 185F oven to cook for the next 12 hours.  Big Yellow was also ready to come off the heat and slowly come down to room temperature.

Decent start.  Again, looked like a meaty hambone soup but smelled like so much more.  I was hoping this would end up being more like a shepherds pie than a stew/soup, so I was happy the liquid content seemed to be diminishing

With the cooking complete for day 2, we headed out for the evening and I secretly (loudly) started stressing about the following day.  When we got home, the cooled down ragout headed into the fridge to cool completely overnight and we got to sleep with the intoxicating aroma of cooking duck filling our noses, clothes, and bedding.

The denouement next week.