After the chicken slaughter, I headed back to Philly with both birds since John and Tim expressed no interest in cooking them.  Due to the age of the chickens, I knew I would need to cook them for a long time at low heat in order to avoid the meat getting rubbery and stringy.  I decided that I would remove the skin and excess fat, debone the majority of the meat, and then braise the meat to make pulled chicken.  Here’s how it all went down.

The whole chickens rode back from NJ wrapped tightly in plastic wrap, packed in ice and placed in one of those Coors Light cooler bags that I use instead of purchasing a real cooler.  Once I got home, I laid out the first chicken on the largest plastic cutting board we own.

You're looking at 50% of the counter space available in our Philly kitchen. There's a reason why most of the cooking for this blog happens elsewhere

I removed the wings from both birds since that was the only part of the chicken I wanted to keep the skin on.  Not sure why, but it made sense to me at the time.  They were the first items thrown into the bowl that I would eventually season all the chicken in.

Have to admit that my first experience eating buffalo wings post-slaughter didn't go so well. Luckily I am heading to Buffalo in 10 days for our annual wing, hockey, and beef on weck pilgrimage

Once that was done, I started skinning the chicken.  It’s a very easy process, mostly just lifting the skin and cutting away from the meat, but I was amazed by how much fat was on the birds.  Glad that I was able to expose that and trim it away.  Action shot! 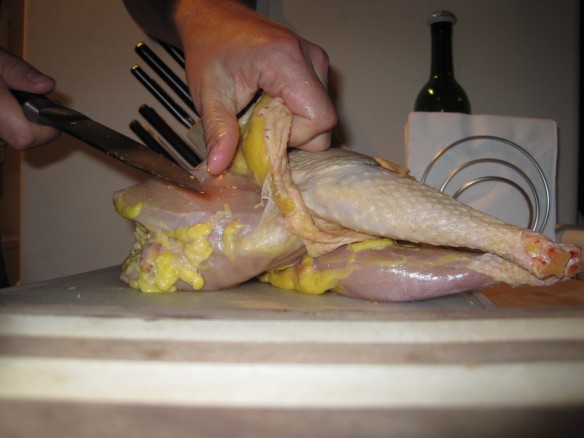 I know it looks gross but it is what it is. I used a 30 second timer for this. My usual photographer, Kristi, wanted nothing to do with any part of this process

Chicken fat is usually a whitish-yellow and I’m assuming that the reason the fat on this one was so yellow was due to its advanced age.  Or it’s one of the handful of eye opening differences between the rapidly fattened chickens you buy in a store and the homegrown variety.  Here’s how it looked once all skin and excess fat were trimmed off. 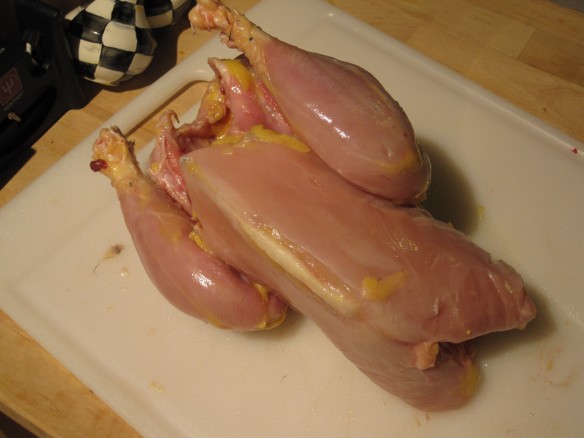 These birds were old and skinny

At this point I clumsily removed most of the breast meat, tenderloins and whole thighs from the main body.  I gots a lot to learn about deboning, but here’s where I ended up. 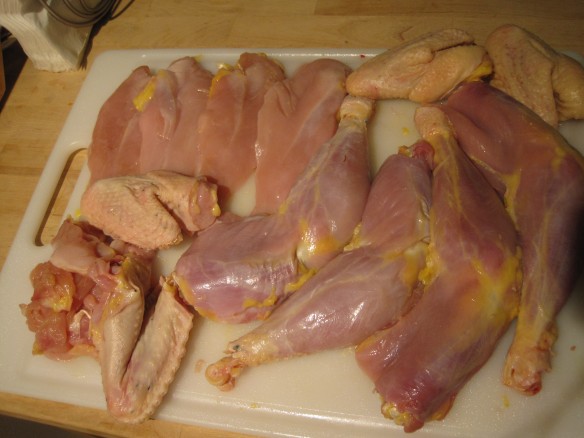 There's also not much light in the kitchen. In general, the kitchen sucks

The thighs were about the size I expected, but the chicken breasts were under half the size of what I usually buy in the store.  Again, these were old chickens raised on regular corn feed, but it still made me wonder what the hell they are giving chickens these days.

I seasoned the meat thoroughly with a slight variation of the rub I use when making pulled pork; a mixture of brown sugar, paprika, cayenne, ground mustard, garlic powder, salt and pepper.

For the first time since Bagels-4-U ten hours earlier, something smelled appetizing

This was covered and put in the fridge for some of the flavors to soak in overnight.  I headed to Roosevelts to soak in $8 Bud Light pitchers and contract the requisite Wharton-night-out headache.

The next morning I broke out the Le Creuset and got some oil heated on the cooktop.  Again, not sure why this was what made sense to me, but first item into the pot was the wings to get the skin browned and cook some of the rich flavor out.

The burnt areas on the bottom of the pot was what I was hoping for. It gave the final product more flavor

For the braising liquid I added a few cups of chicken broth, a little apple cider vinegar, and about 8 ounces of apple juice for some sweetness.  Then the rest of the chicken meat.

Once I got the liquid up to heat the lid went on and the Le Creuset went into a 250 degree oven for about six hours.  Perfect timing for the 4:30 NFL games.  Not that I was hosting anyone for those games, I just get hungry around then.  And before the 1:00 games.  And before Sunday night football.  If my life was all NFL Sundays, I would definitely be crying to Bob and Jillian on Biggest Loser by 2015.  Here’s what came out of the oven:

I know it looks gross, but the smell was wonderful

The meat had cooked down to very dense and tender pieces, exposing the bones on the thighs.  I removed all the meat from the pot but reserved the liquid to add a splash once the meat was fully shredded.  The meat was falling apart as I transfered it and it fell off the bone when touched by a fork. 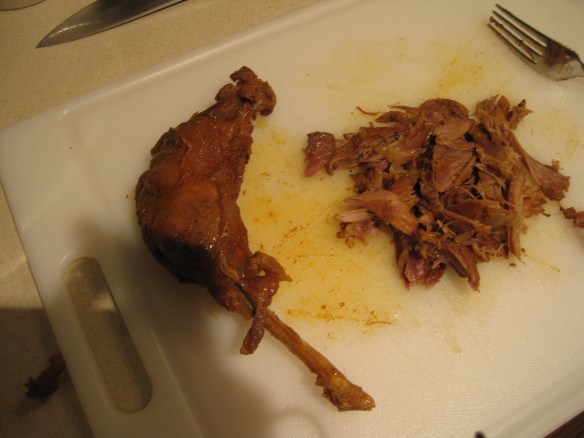 After all the chicken was shredded, I ended up with a little under two pounds of meat.

Kristi and I ate the final product over a period of three days.  Me more than Kristi.  Throw it in a pan to heat it up, mix in a little BBQ sauce and you’ve got a plate of deliciousness. 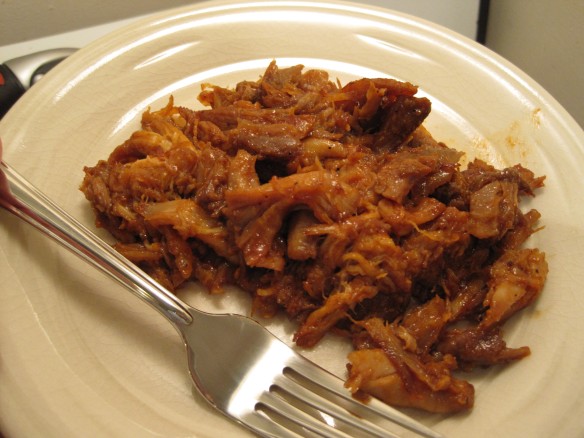 And that was it.  Luckily the chicken came out well which helped validate the whole experience.

Not sure what next week will bring but I have some ideas.  Thanks for reading.

2 thoughts on “Pulled Chicken (feat. those chickens I killed)”